Woodborers in the Agrilus genus (Coleoptera: Buprestidae) pose high invasiveness risk as indicated by the recent invasion and continental spread of emerald ash borer, and the associated threat to ash resources in North America. In that context, development of detection tools for potentially invasive Agrilus spp. is a research priority. Experiments carried out in 2013 in Slovakian beech and poplar forests evaluated the attraction of multiple Agrilus species to green and purple sticky prism traps baited with various lures [blank, cubeb oil, (Z)-3-hexenol]. The two most abundant species were Agrilus viridis L. in beech (Fagus spp.) forest (146 adults, >95%of which were females) and Agrilus convexicollis Redtenbacher in poplar (Populus spp.) forest (158 adults, two-thirds of themmales). The two species exhibited opposite responses to color: purple traps attracted 2–39 more adult A. viridis than green traps, whereasmost (>95%) specimens of A. convexicollis were captured on green traps. Volatile baits did not influence captures of adults for either species. The introduction and establishment of A. viridis in North America is of particular concern owing to its feeding niche (primary pest that can attack healthy trees), large body size, and high level of polyphagy (>10 genera of host trees). Additional experiments conducted in beech forests in 2014 found purple prism traps more attractive to female A. viridis than green prism traps, especially those baited with cubeb oil. No analysis was conducted for males because of their low abundance. Female A. viridis flew earlier in 2013 than in 2014, but neither their body size nor fecundity varied between years. In both years, large females had more eggs in their abdomen than small females, and the number of eggs steadily declined over time, which suggests that female A. viridis are reproductively mature at emergence. 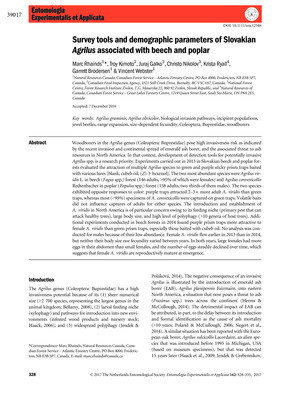