The objective of this study was to investigate the impact of different soil covers used to reclaim decommissioned oil sands mining sites on the genetic diversity of aspen and their associated belowground microbiota. Aspen genotyping showed that trees mostly originated from sexual reproduction on sites reclaimed with soil covers made of upland forest floor-mineral mix (FFMM) and lowland peat-mineral mix (PMM). In contrast, most individuals in mature and burned stands sampled as benchmarks for natural disturbances originated from vegetative reproduction. Nonetheless, aspen populations in the FFMM and PMM sites were not genetically different from those in mature and burned stands. DNA metabarcoding of bacteria and fungi in root and soil samples revealed that the diversity of the belowground microbiota associated with aspen and the relative abundance of putative symbiotic taxa in PMM were significantly lower than for FFMM and naturally disturbed sites. Despite similar aspen genetic diversity between FFMM and PMM sites, trees were not associated with the same belowground microbiota. Because the soil microbiome and more specifically the mycorrhizal communities are variable both in space and time, long-term monitoring is particularly important to better understand the ecological trajectory of these novel ecosystems.

They also analyzed the bacteria and fungi in the soil, which revealed that less diversity was present in the peat-mineral mix than in the forest litter-mineral mix or in post-fire forests.

Because the soil microbiome and, more specifically, mycorrhizae communities (root-associated fungi that form complex structures) vary according to both time and space, long-term monitoring is particularly important to gain a better understanding of the evolution of these new ecosystems. 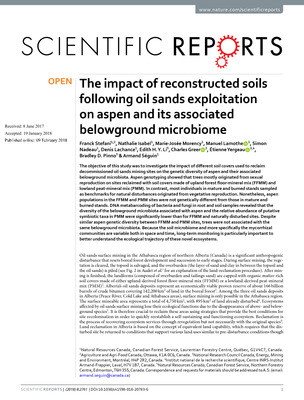