Amsacta moorei entomopoxvirus (AMEV), the most studied member of the genus Betaentomopoxvirus, was initially isolated from Red Hairy caterpillar larvae, Amsacta moorei. According to genome sequence and previous studies it was shown that amv248 encodes a putative glycosyltransferase that is the only conserved attachment protein in betaentomopoxviruses. Transcriptional analysis of the amv248 gene by RT-PCR and qPCR showed that transcription starts at 6 h post infection (hpi). Also, transcription was not affected by a DNA replication inhibitor but was severely curtailed by a protein synthesis inhibitor. These results indicate that amv248 belongs to the intermediate class of gene expression. 5′ and 3′ untranslated regions analysis revealed that transcription initiates at position –126 relative to the translational start site, and ends between 50 and 83 bases after the stop codon. To narrow down the size and location of the gene’s promoter, the upstream region as well as several different sized deletions thereof were generated and cloned upstream of a luciferase reporter gene. The constructs were used to measure the Firefly and Renilla luciferase activities in dual assays. The results showed that luciferase activity decreased when bases –198 to –235 of amv248 upstream region were missing. Sequence analysis among the intermediate gene promoters of AMEV showed that TTTAT(T/A)TT(T/A)2TTA is possibly a common motif, however, further investigations are needed to confirm this conclusion.

We investigated the virus, Amsacta moorei entomopoxvirus (AMEV), initially isolated from Red Hairy caterpillar larvae, Amsacta moorei, and currently the most studied member of the genus Betaentomopoxvirus. Entomopoxviruses are in the family of poxviruses, Poxviridae, which includes the Variola virus that caused millions of deaths around the world before eradication in 1977. They can infect vertebrates (subfamily Chordopoxvirinae) and invertebrates (subfamily Entomopoxvirinae). In order to understand the molecular mechanisms of the virus replication of AMEV (subfamily Entomopoxvirinae), several genes were studied and data suggests the gene AMV248 encodes a putative glycosyltransferase protein similar to the H3 attachment protein in Vaccinia virus, the active constituent virus in the vaccine for smallpox, and has a significant role in the initiation of virus replication. The present study focused on the transcription of AMV248 and identification of its temporal class along with studies on the 5′ and 3′ untranslated regions (UTRs) of mRNA and promoter region. 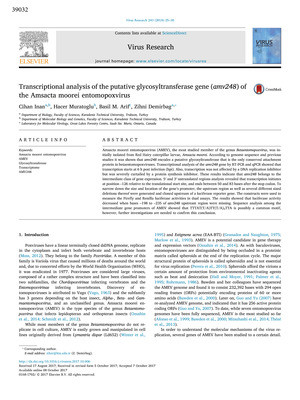