Changes in natural and anthropogenic disturbances in the mixedwood boreal forests of northwest Quebec have modified the landscape heterogeneity in terms of its composition and configuration. The aim of this study was to evaluate the heterogeneity (composition and configuration) of 78,000 km2 of mixedwood boreal forest landscape during recent decades (using Landsat imagery from 1985 to 2013) in areas affected by forest management. The classes Conifer, Mixed-Conifer, Mixed-Hardwood, and Hardwood were differentiated with an object-based classification (accuracy >80.2, Kappa coefficient >0.7). Also, 5 metrics (mean area, largest patch index, percentage the landscape of the core area, perimeter-area fractal dimension, and aggregation index) were calculated. This study showed that conifer-dominant cover dominates the mosaic and accounted for one third of the study area. Nevertheless, the conifer-dominant class showed the greatest decrease (reduction of 35% of its initial area at a rate of 1.7% per year). The metrics indicated that forest management in recent years produced a more heterogeneous landscape in 2013 unlike the landscape in 1985. The fire-influenced, old-growth conifer forests that previously dominated the landscape in northwestern Quebec were transformed by forestry practices into a more heterogeneous landscape.

The results of this study show that the landscapes of northwestern Quebec shaped by fires and dominated by old coniferous forests were transformed by forest practices between 1985 and 2013. These landscapes have become more heterogenous.

The purpose of this study was to assess heterogeneity variations in 78,000 km2 of managed boreal mixed forest over the last decades. The researchers used Landsat satellite imagery to study landscape changes.

The researchers divided the forest cover into four classes: coniferous, mixed coniferous, mixed deciduous and deciduous. Although the “coniferous” class is dominant (one third of the region studied), it is this class that shows the greatest decline, i.e. a 35% decrease in its initial surface area. 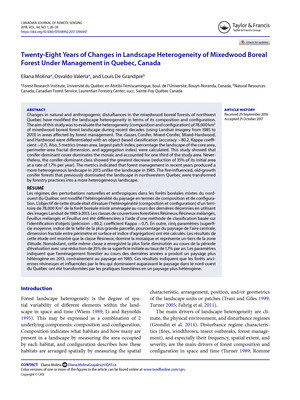