Stem size distribution (SSD), which describes tree frequencies in diameter classes within an area, has a variety of direct and indirect applications that are critical for forest management. In this study, we evaluated which structural characteristics derived from Airborne Laser Scanning (ALS) data were best able to differentiate between unimodal and bimodal stands in a managed boreal mixedwood forest in Alberta, Canada. We then used wall-to-wall ALS data to predict (for 20 m-by-20 m grid cells) the parameters of a Weibull SSD in unimodal cells, and a Finite Mixture Model (FMM) in bimodal cells. The resulting SSDs were evaluated for their fit to ground plot-measured SSDs using an Error Index (EI). We found that the variance of ALS return heights was the best metric for differentiating between unimodal and bimodal stands, with a classification accuracy of 77%. Parameters of both the Weibull and FMM distributions were accurately predicted (r2 ~ 0.5, Root Mean Square Error (RMSE) ~ 30%), and that differentiating for modality prior to estimating SSD improved the accuracy of estimates (EI of 49.13 with differentiation versus 51.31 without differentiation). Unique to our presented approach is the stratification by SSD modality prior to the modelling of distributions. To achieve this, we apply a threshold to an ALS metric that allows SSD modality to be distinguished for each cell at the landscape level, and this a priori information is then used to ensure that the appropriate distribution is modelled. Our approach is parsimonious and efficient, enabling improved accuracy in SSD estimation across diverse landscapes when ALS data is the sole data source.

Objective: The overall objectives were to evaluate the efficacy of our parameter optimization technique and determine the combination of PDF, optimization, and ALS modelling approach that most accurately predicted stem size distribution in our boreal mixedwood forest study area. Stem size distribution describes tree frequencies in diameter classes within an area, has a variety of direct and indirect applications critical for forest management. Major findings: • In this study, we tested the efficacy of two parameter optimization techniques with different probability density functions (PDFs) (Weibull, Truncated Weibull, and Johnson’s Sb) to determine which produced the most accurate estimates of SSD in managed boreal mixedwood stands in Alberta, Canada. • In addition to the conventional approach of Maximum Likelihood Estimation (MLE) for parameter optimization, we developed a recursive approach that fits PDF parameters based on minimizing observed differences in each diameter class, known as the Reynold’s Error Index (REI). • Parameters were then estimated using metrics derived from Airborne Laser Scanning (ALS) data as predictor variables. • The Truncated Weibull function produced the most accurate estimates of SSD when estimated with ALS, with a mean REI of 40.97, compared to 43.74 and 56.55 for the Weibull and Johnson’s Sb, respectively. • The recursive approach was significantly more accurate than MLE across all PDFs in describing empirical SSDs. SSD estimates improved using the recursive technique could lead to more informed decisions by forest professionals based on fitted SSDs. 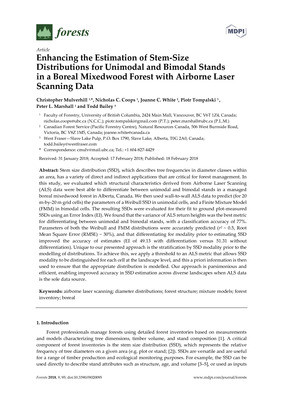