This report presents the second year’s results (2017) of the research project aiming to assess the efficacy of Trichogramma releases against SBW. In 2017, eleven blocks were set up in three areas in Quebec: seven blocks had a control, a release by card and a release by drone plots. The other four blocks had a control and a release by card plot. In each plot, branches were collected in the spring and fall to evaluate population densities using L2, and in summer for SBW egg parasitism. Moths were collected using pheromone traps from the Budworm Tracker project (http://budwormtracker.ca) in each region to synchronize the release with oviposition. While in 2016, results showed that egg parasitism was higher in all plots treated with cards, in 2017, the results were not as clear. The block with the lowest egg density showed a higher egg parasitism for both treated plots (cards and drones) compared to the control. However, parasitism was low in the other blocks. Several factors could have decrease the impact of our parasitoids’ releases: the cold and rainy weather, the presence of another moth species in abundance that could have come into competition with SBW eggs for parasitism, and predation by slugs. 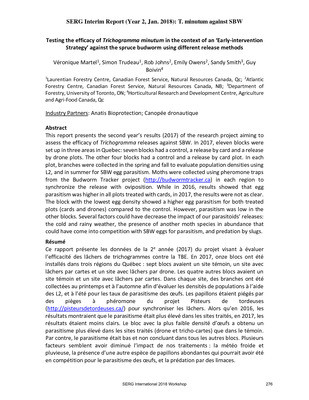