For many species, dispersal among populations has profound impacts on local dynamics and the spread of outbreaks. Understanding the environmental and genetic triggers of density-dependent dispersal is important for improving population models and developing reliable management strategies. We hypothesized that moth dispersal in the spruce budworm (Choristoneura fumiferana Clem.) is triggered by reductions in larval food availability and mediated by the expression of the for gene, which affects movement and dispersal activity in Drosophila and other species. Late-stage larvae were reared under different food-limitation treatments. Dispersal of adults was assessed using three measures of flight performance on flight mills:maximum velocity, 1-h flight distance and maximum sustained flight time. Accumulation of for transcripts was measured by a quantitative polymerase chain reaction on moths from each treatment. Flight activity was positively related to moth size and, although food limitation caused reductions in moth size, it also had an independent and positive effect on maximum velocities, sustained flight times and flight distances. Food limitation had no effect on expression of the for gene. We conclude that reductions in food availability will produce moths that are smaller but exhibit increased flight activity, potentially increasing the population of dispersing individuals. The physiological basis for this effect remains unknown.

For many forest insect species dispersal is an important process affecting the spread of outbreaks across a landscape. Understanding the environmental and genetic triggers that cause dispersal is important for creating accurate pest population models, predicting outbreak spread, and developing reliable management strategies. We tested whether or not moth dispersal in the eastern spruce budworm (Choristoneura fumiferana Clem. Lepidoptera: Tortricidae) is triggered by reductions in food availability during the caterpillar stage, and furthermore, tried to identify the genetic mechanism involved. We reared caterpillars under different food-limitation treatments and tested their flight performance at the moth stage on flight mills in the lab. We found that even modest reductions in food availability, typical of the high density increasing phase of an outbreak, will produce moths that are smaller but exhibit increased flight activity, however, we were unable to identify specific genes associated with this effect. This research suggests that, as part of an early intervention strategy for managing spruce budworm outbreaks, new populations should be suppressed early in the outbreak cycle in order to prevent increased rates of dispersal. 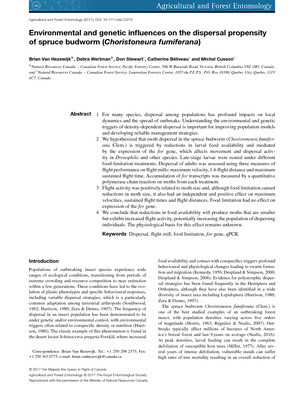