Forest canopy gaps play an important role in forest dynamics. Airborne laser scanning (ALS) data provide demonstrated capacity to systematically and accurately detect and map canopy gaps over large forest areas. Digital aerial photogrammetry (DAP) is emerging as an alternative, lower-cost source of three-dimensional information for characterizing forest structure and modelling forest inventory attributes. In this study we compared the relative capacities of ALS and DAP data to map canopy gaps in a complex coastal temperate rainforest on Vancouver Island, British Columbia, Canada. We applied fixed- and variable-height threshold approaches for gap detection using both ALS and DAP data, and validated outcomes using independent data derived via visual image interpretation. Overall accuracies for ALS-derived gaps were 96.50% and 89.50% for the fixed- and variable-height threshold approaches respectively, compared to 59.50% and 50.00% for the DAP-derived gaps, with DAP data having large errors of omission (>88%). We found that 70% of ALS-derived gaps were identified in old seral stage stands (age > 250 years), while 65% of DAP-derived gaps were located in early seral stage stands (age < 40 years). For the DAP data, gap detection accuracy was 80% in early seral stands, compared to 50% in old seral stands. In contrast, ALS detection accuracy varied by only ~6% between early and old seral stages. We compared detected gaps using a variety of metrics and found significant differences in the number and average size of gaps detected using ALS and DAP data. Using the fixed-height threshold, the ALS data identified 16 times more gaps and 6.5 times more gap area than the DAP data, with a mean ALS-derived gap size that was half that of the DAP data. The average amount of overlap between ALS- and DAP-detected gaps was 13.26% and 42.90% for the variable and fixed thresholds, respectively. We attribute these differences in gap detection to the nature of the DAP data itself, which characterizes primarily the outer canopy envelope, as well as to the confounding effects of canopy complexity and related occlusions and shadows on image matching algorithms. We conclude that DAP data do not provide analogous results to ALS data for canopy gap detection and mapping in coastal temperate rainforests, and that ALS data enable markedly superior accuracy and detailed gap characterizations.

Objective: The objective of this study was to quantify the differences in gap detection between ALS and DAP derived canopy gaps for a complex, coastal temperate rainforest on Vancouver Island, British Columbia to gain some insights on the relative capacity of DAP data for this application. DAP data has emerged as a low-cost alternative to ALS data for forest inventory applications. However, many of those inventory applications are driven by canopy heights, which may be derived with comparable accuracies from these two data sources. While the effectiveness of ALS data for detecting and mapping canopy gaps has been well demonstrated in the scientific literature, DAP data has not been explored for this application, particularly in complex forest environments such as the coastal temperate forests of Canada's west coast. 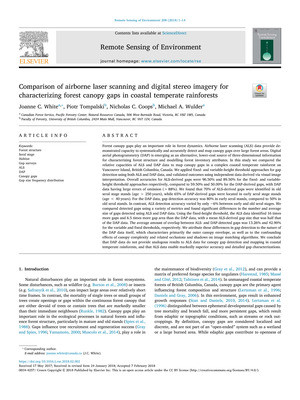