Wildland fires are the main natural disturbance shaping forest structure and composition in eastern boreal Canada. On average, more than 700 000 ha of forest burns annually and causes as much as CAD 2.9 million worth of damage. Although we know that occurrence of fires depends upon the coincidence of favourable conditions for fire ignition, propagation, and fuel availability, the interplay between these three drivers in shaping spatiotemporal patterns of fires in eastern Canada remains to be evaluated. The goal of this study was to reconstruct the spatiotemporal patterns of fire activity during the last century in eastern Canada’s boreal forest as a function of changes in lightning ignition, climate, and vegetation. We addressed this objective using the dynamic global vegetation model LPJ-LMfire, which we parametrized for four plant functional types (PFTs) that correspond to the prevalent tree genera in eastern boreal Canada (Picea, Abies, Pinus, Populus). LPJ-LMfire was run with a monthly time step from 1901 to 2012 on a 10 km2 resolution grid covering the boreal forest from Manitoba to Newfoundland. Outputs of LPJ-LMfire were analyzed in terms of fire frequency, net primary productivity (NPP), and aboveground biomass. The predictive skills of LPJ-LMfire were examined by comparing our simulations of annual burn rates and biomass with independent data sets. The simulation adequately reproduced the latitudinal gradient in fire frequency in Manitoba and the longitudinal gradient from Manitoba towards southern Ontario, as well as the temporal patterns present in independent fire histories. However, the simulation led to the underestimation and overestimation of fire frequency at both the northern and southern limits of the boreal forest in Québec. The general pattern of simulated total tree biomass also agreed well with observations, with the notable exception of overestimated biomass at the northern treeline, mainly for PFT Picea. In these northern areas, the predictive ability of LPJ-LMfire is likely being affected by the low density of weather stations, which leads to underestimation of the strength of fire–weather interactions and, therefore, vegetation consumption during extreme fire years. Agreement between the spatiotemporal patterns of fire frequency and the observed data across a vast portion of the study area confirmed that fire therein is strongly ignition limited. A drier climate coupled with an increase in lightning frequency during the second half of the 20th century notably led to an increase in fire activity. Finally, our simulations highlighted the importance of both climate and fire in vegetation: despite an overarching CO2-induced enhancement of NPP in LPJ-LMfire, forest biomass was relatively stable because of the compensatory effects of increasing fire activity.

In this study, the researchers developed a model to reconstruct the spatiotemporal patterns of fire activity over the last century in 20 sites of eastern Canada's boreal forest (Manitoba to Newfoundland) according to changes in lightning ignition, climate and vegetation.

According to the model, climate and lightning ignition variability at decadal or annual time scales have been the primary drivers of fire activity since the beginning of the 20th century.

On average, over 700,000 hectares of Canadian forests are burned every year. Based on this model, fire activity increased during the second half of the 20th century due to drier weather conditions and higher lightning frequency.

The model also highlighted the impact of climate and fire on vegetation. Despite the positive fertilization effect of higher concentrations of CO2 in the atmosphere on forest productivity, forest biomass remained relatively stable due to greater losses resulting from an increased fire activity. 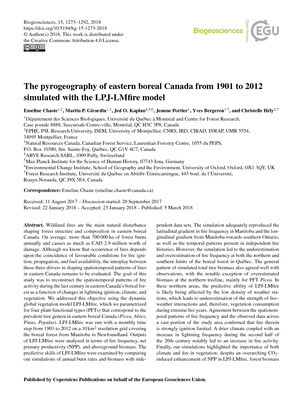