Climate change will drive significant changes in annual area burned (burning rates) in the boreal forest although the trends, which are highly variable among studies, which may be caused by model specifications. In order to investigate this, we used 100 models predicting burning rates that are based on two predictor datasets (annual or 30-year averages) and five statistical algorithms (generalised linear model (GLM), random forest, gradient-boosted model (GBM), regression trees, multivariate adaptive regression splines (MARS)) to build a consensus model projecting future burning rates in boreal Canada with three global climate models (GCMs) (CanESM2, HadGEM and MIROC) and three anthropogenic climate forcing scenarios (RCP 2.6, RCP 4.5 and RCP 8.5). Results of the ensemble models were then used to quantify and map the uncertainty created by model specifications. The consensus model projects strong increase (>4-fold by 2080s) in burning rates, particularly under high climate-forcing scenarios. Even with very high goodness-of-fit in the consensus model, the model-specification uncertainty for future periods (­­>200%) could still be much higher than that of different GCMs and RCP scenarios. When tallied, we show that the total uncertainty could greatly hinder our ability to detect significant trends in burning rates for much of Canada at the end of the 21st century.

The model projects a strong increase in areas burned (over four times greater by 2080), particularly under scenarios where the expected climate change is more significant.

However, the researchers showed that projections varied considerably among the 100 models used. This uncertainty could greatly hinder the ability to detect significant trends in annual areas burned throughout the 21st century for much of Canada's boreal forest. 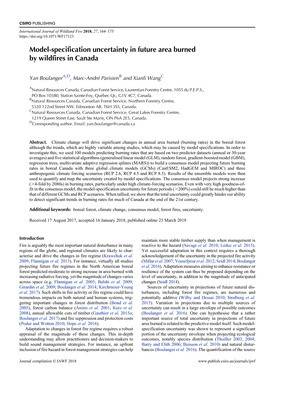