Mitogenomes are useful markers for phylogenetic studies across a range of taxonomic levels. Here, we focus on mitogenome variation across the tortricid moth genus Choristoneura and particularly the spruce budworm (Choristoneura fumiferana) species complex, a notorious pest group of North American conifer forests. Phylogenetic relationships of Tortricidae, representing two subfamilies, four tribes and nine genera, were analyzed using 21 mitogenomes. These included six newly-sequenced mitogenomes for species in the spruce budworm complex plus three additional Choristoneura species and 12 previously published mitogenomes from other tortricids and one from the Cossidae. We evaluated the phylogenetic informativeness of the mitogenomes and reconstructed a time-calibrated tree with fossil and secondary calibrations. We found that tortricid mitogenomes had conserved protein and ribosomal regions, and analysis of all protein-coding plus ribosomal genes together provided an efficient marker at any taxonomic rank. The time-calibrated phylogeny showed evolutionary convergence of conifer feeding within Choristoneura, with two independent lineages, the Nearctic spruce budworm complex and the Palearctic species Choristoneura murinana, both shifting onto conifers about 11 million years ago from angiosperms. These two host-plant shifts both occurred after the formation of boreal forest in the late Miocene. Haplotype diversification within the spruce budworm complex occurred in the last 4 million years, and is probably linked to the initial cooling cycles of the Northern Hemisphere in the Pliocene.

In this article, the researchers studied variations in the genome of mitochondria in Tortricidiae, the group of insects to which the spruce budworm belongs. Mitochondria are the elements within cells whose main purpose is to supply the energy required for the cells to perform their functions. Among other things, the analysis of the mitochondria genome helps to identify the insect’s diet.

By working backwards in time, the researchers traced two principal lineages of budworms. Their findings revealed, among other things, that these two lineages selected conifers rather than deciduous host trees 11 million years ago. 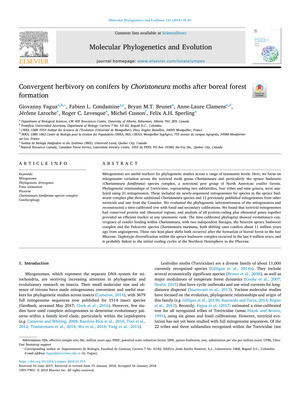