Whitebark pine (WBP, Pinus albicaulis Engelm.) is an endangered conifer species due to heavy mortality from white pine blister rust (WPBR, caused by Cronartium ribicola) and mountain pine beetle (Dendroctonus ponderosae). Information about genetic diversity and population structure is of fundamental importance for its conservation and restoration. However, current knowledge on the genetic constitution and genomic variation is still limited for WBP. In this study, an integrated genomics approach was applied to characterize seed collections from WBP breeding programs in western North America. RNA-seq analysis was used for de novo assembly of the WBP needle transcriptome, which contains 97,447 protein-coding transcripts. Within the transcriptome, single nucleotide polymorphisms (SNPs) were discovered, and more than 22,000 of them were non-synonymous SNPs (ns-SNPs). Following the annotation of genes with ns-SNPs, 216 ns-SNPs within candidate genes with putative functions in disease resistance and plant defense were selected to design SNP arrays for high-throughput genotyping. Among these SNP loci, 71 were highly polymorphic, with sufficient variation to identify a unique genotype for each of the 371 individuals originating from British Columbia (Canada), Oregon and Washington (USA). A clear genetic differentiation was evident among seed families. Analyses of genetic spatial patterns revealed varying degrees of diversity and the existence of several genetic subgroups in the WBP breeding populations. Genetic components were associated with geographic variables and phenotypic rating of WPBR disease severity across landscapes, which may facilitate further identification of WBP genotypes and gene alleles contributing to local adaptation and quantitative resistance to WPBR. The WBP genomic resources developed here provide an invaluable tool for further studies and for exploitation and utilization of the genetic diversity preserved within this endangered conifer and other five-needle pines.

Whitebark pine is listed as an endangered forest species because of disturbance from pathogens/pests and changing climates. Information about the genetic diversity and population structure is important for saving this tree species in North America. The objectives of the present work were to understand genetic constitution and genomic variations using an integrated genomics approach, and to provide genomic resources and tools for breeding improvement of whitebark pine. We generated a needle transcriptome with 97,532 protein-coding sequences by de novo assembly. Over 22,000 non-synonymous single nucleotide polymorphisms (ns-SNPs) were detected and annotated in the whitebark pine genome. We determined genotypes for 372 samples collected across western North America by targeting at ns-SNPs within candidate genes. The candidate genes have putative functions in disease resistance and plant defense. We found unique genotype for each individual and a clear genetic differentiation among seed families in British Columbia of Canada, and Oregon and Washington States of USA. A total of nine genetic subgroups were classified in the populations, and we determined their associations with ecological variables and rust disease severity. The genomic resources developed in this study and our current findings will facilitate a further identification of whitebark pine genotypes and gene alleles contributing to local adaptation and quantitative resistance to white pine blister rust disease. The research approach and whitebark pine genomic resources may be useful for molecular breeding and genomics studies on other related five-needle pine species. 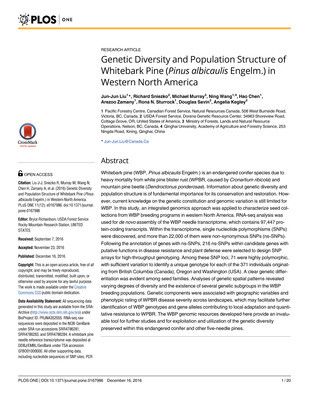