Forest invasive alien species are a major threat to ecosystem stability and can have enormous economic and social impacts. For this reason, preventing the introduction of Asian gypsy moths (AGM; Lymantria dispar asiatica and L. d. japonica) into North America has been identified as a top priority by North American authorities. The AGM is an important defoliator of a wide variety of hardwood and coniferous trees, displaying a much broader host range and an enhanced dispersal ability relative to the already established European gypsy moth (L. d. dispar). Although molecular assays have been developed to help distinguish gypsy moth subspecies, these tools are not adequate for tracing the geographic origins of AGM samples intercepted on foreign vessels. Yet, this type of information would be very useful in characterizing introduction pathways and would help North American regulatory authorities in preventing introductions. The present proof-of-concept study assessed the potential of single nucleotide polymorphism (SNP) markers, obtained through genotyping by sequencing (GBS), to identify the geographic origins of gypsy moth samples. The approach was applied to eight laboratory-reared gypsy moth populations, whose original stocks came from locations distributed over the entire range of L. dispar, comprising representatives of the three recognized subspecies. The various analyses we performed showed strong differentiation among populations (FST ≥ 0.237), enabling clear distinction of subspecies and geographic variants, while revealing introgression near the geographic boundaries between subspecies. This strong population structure resulted in 100% assignment success of moths to their original population when 2,327 SNPs were used. Although the SNP panels we developed are not immediately applicable to contemporary, natural populations because of distorted allele frequencies in the laboratory-reared populations we used, our results attest to the potential of genomewide SNP markers as a tool to identify the geographic origins of intercepted gypsy moth samples.

In this study, the researchers present molecular diagnostic tests that can identify the geographical origin of Asian gypsy moths intercepted on ships coming from abroad in order to develop regulatory measures to prevent introductions of this exotic forest pest.

The Asian gypsy moth is an important defoliating insect that attacks a larger variety of conifers and broadleaf trees than the European gypsy moth, which is already established in North America. Contrary to their European counterparts, female Asian gypsy moths are capable of flight and can thus rapidly colonize a large area.

Preventing the introduction of the Asian gypsy moth into North America is a top priority as it would have significant economic and ecological impacts. 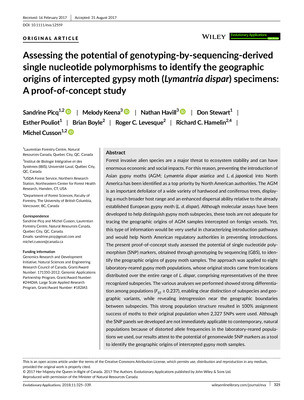