Published data on insecticidal activity of crystal proteins from B. thuringiensis were incorporated into a database on Bt toxin specificity. At the end of 2013, 158 of the 329 known holotypes were tested against 252 species distributed across 95 families in 25 orders, 8 classes, and 5 phyla. Thirty of the 158 proteins were reported to have no pesticidal activity, 59 were active against Lepidoptera, 42 against Diptera, 40 against Coleoptera, 10 against Hemiptera, 4 against Hymenoptera, and 1 against Orthoptera. Reports of toxicity to Trichoptera, Neuroptera, and Siphonaptera were not substantiated. Twelve proteins were reported to have activity against non-Arthropod species in the phyla Platyhelminthes and Nematoda. Activity outside orders of primary specificity was reported for 28 proteins affecting 75 taxa and was substantiated by reasonable evidence (mortality estimates) for 21 proteins and 51 taxa. Substantiated cross-activity occurred in 14 primary rank families across three classes of pesticidal proteins (Cry, Cyt, and Vip). One-third of reported cross-activities fall within the range of toxicities exhibited by order-specific proteins that are commonly used in pest control applications. Cross-activities therefore should be considered when designing or approving the use of B. thuringiensis pesticidal proteins in pest control applications. 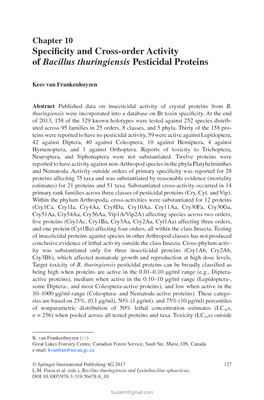