We report that it is rapid and easy to install traps in the upper canopy of balsam fir with the BigShot technique and we confirm that traps placed in the upper canopy were much more efficient than those placed at 2-3 m high. Placing traps in the upper canopy of trees should be considered, particularly if large white spruces are present, at least in a subset of surveyed stands in non-outbreak areas, in an early intervention strategy as well as in moth dispersal studies. We also showed that combining pheromone to a portable light trap did not increased spruce budworm moth catches, contrary to other moths. As it increases sorting time, there is no advantage to combine these attractants for monitoring the spruce budworm. Pheromone trap catches in trace or low population density were similar, which is surprising as trace populations were located in the Lower St-Lawrence region, at the south-western edge of the ongoing outbreak. However, light trap catches were better link with population density of these two regions. Light traps and pheromone traps may provide estimates at different spatial scales and they could thus provide complementary information on spruce budworm populations. The interpretation of these results should be clarified when upcoming L2 population estimates will be available. 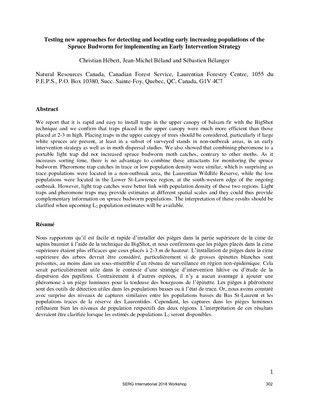