Bark beetles form multipartite symbiotic associations with blue stain fungi (Ophiostomatales, Ascomycota). These fungal symbionts play an important role during the beetle’s life cycle by providing nutritional supplementation, overcoming tree defences and modifying host tissues to favour brood development. The maintenance of stable multipartite symbioses with seemingly less competitive symbionts in similar habitats is of fundamental interest to ecology and evolution. We tested the hypothesis that the coexistence of three fungal species associated with the mountain pine beetle is the result of niche partitioning and adaptive radiation using SNP genotyping coupled with genotype–environment association analysis and phenotypic characterization of growth rate under different temperatures. We found that genetic variation and population structure within each species is best explained by distinct spatial and environmental variables. Our study highlights unique phenotypic and genotypic characteristics in these symbionts that are consistent with our hypothesis. By maintaining this multipartite relationship, the bark beetles have a greater likelihood of obtaining the benefits afforded by the fungi and reduce the risk of being left aposymbiotic. Complementarity among species could facilitate colonization of new habitats and survival under adverse conditions. 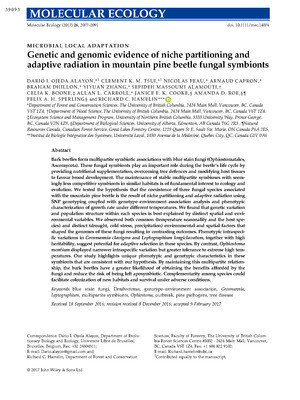