Climate-induced vegetation change may be delayed in the absence of disturbance catalysts. In the western boreal region, however, an increase in wildfire activity may accelerate these transitions. To better understand factors influencing decadal-scale upland vegetation change, we developed a hybrid modelling approach based on topoedaphically constrained projections of climate-driven vegetation change, coupled with weather- and fuel-based simulations of future wildfires using Burn-P3, a spatial fire simulation model. We evaluated eighteen scenarios based on all possible combinations of three fuel assumptions (static, fire-mediated, and climate-driven), two fire regime assumptions (constrained and unconstrained), and three global climate models. We simulated scenarios of fire-mediated change in forest composition over the next century, concluding that, even under conservative assumptions about future fire regimes, wildfire activity could be great enough to facilitate the conversion of approximately half of Alberta’s upland mixedwood and conifer forest to more climatically suited deciduous woodland and grassland by 2100. When fire regime parameter inputs (number of fire ignitions and duration of burning) were modified according to future fire weather projections, the simulated area burned was almost enough to facilitate a complete transition to climate-predicted vegetation types. With fire regime parameters held constant at current values, however, the rate of increase in fire probability diminished, suggesting a negative feedback process by which a short-term increase in less flammable deciduous forest leads to a long-term reduction in area burned. Our spatially-explicit simulations of fire-mediated vegetation change provide managers with scenarios that can be used to plan for a range of alternative landscape conditions. 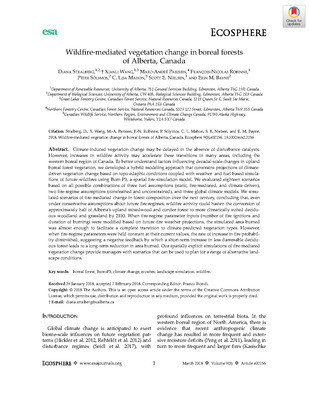