A recent outbreak of mountain pine beetle (MPB) has spread over more than 25 million hectares of pine forests in western North America, affecting pine species of sensitive boreal and mountain ecosystems. During initial host colonization, female MPB produce and release the aggregation pheromone trans-verbenol to coordinate a mass attack of individual trees. trans-Verbenol is formed by hydroxylation of α-pinene, a monoterpene of the pine oleoresin defense. It is thought that adult females produce and immediately release trans-verbenol when encountering α-pinene on a new host tree. Here, we show that both sexes of MPB accumulate the monoterpenyl esters verbenyl oleate and verbenyl palmitate during their development in the brood tree. Verbenyl oleate and verbenyl palmitate were retained in adult female MPB until the time of emergence from brood trees, but were depleted in males. Adult females released trans-verbenol in response to treatment with juvenile hormone III (JHIII). While both sexes produced verbenyl esters when exposed to α-pinene, only females responded to JHIII with release of trans-verbenol. Accumulation of verbenyl esters at earlier life stages may allow adult females to release the aggregation pheromone trans-verbenol upon landing on a new host tree, independent of access to α-pinene. Formation of verbenyl esters may be part of a general detoxification system to overcome host monoterpene defenses in both sexes, from which a specialized and female-specific system of pheromone biosynthesis and release may have evolved.

During their initial attack on pine trees, female mountain pine beetles produce a pheromone that attracts other coleoptera in preparation of a mass colonization. This aggregation pheromone, trans-verbenol, is derived from a substance present in pine resin (α-pinene).

In this study, the researchers demonstrated that both male and female mountain pine beetles accumulate other chemical substances (verbenyl oleate and verbenyl palmitate) during their development within the tree. The accumulation of these substances, which is greater in females than in males, enables colonizing females to release the aggregation pheromone immediately upon arrival rather than having to wait to produce it from the new host’s resin. This gives the beetles a head start before the host tree is able to mount a defensive response.

This study provides a better understanding of the interaction between the insect and its host, which may help in the development of control tools. 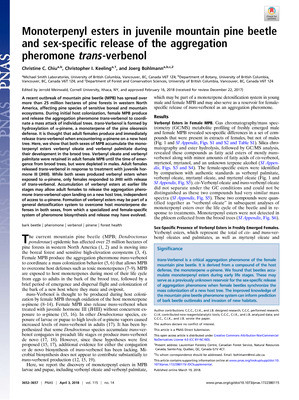