In this paper we tested if the health of adult emerald ash borer beetles was influenced by storing their host logs under refrigerated conditions. We also tested in the number of beetles emerging from those logs was influenced, and how long it took for insects to emerge. We found that the number of insects emerging decreases with longer storage periods, but that the condition of the insects that do emerge is not affected. This work has impact on the practices used to rear emerald ash borer in the laboratory for research or the production of biological control agents. To obtain large numbers of adult beetles laboratories collect infested ash logs in the fall or winter and store the logs until adults are needed. If the health of these adults is influenced by storage it would have impacts on the results of experiments. Our results show that health is not influenced by storage and thus researchers can be confident that emerald ash borer from stored logs are of similar quality to ‘wild’ insects. 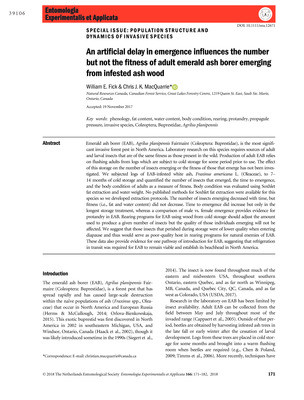