Spinosad is a natural insecticide with potential as a novel biorational control agent for spruce budworm, the most destructive insect defoliator of spruce and balsam fir in Canada. Concurrent terrestrial fate experiments were conducted under full coniferous canopy and in a natural opening of a mature white spruce plantation of central Ontario to examine the fate and persistence of spinosad in the forest floor and underlying soils. Mean initial residues of spinosyn A and D were approximately 0.2 and 0.02 µg g-1, respectively, in thatch and exposed soils, but were substantially higher, 2.72 and 0.36 µg g-1, in litter under coniferous canopy. Results demonstrated that spinosad residues in spruce litter, graminaceous thatch and exposed sandy loam soils dissipated rapidly, following hyperbolic or exponential decline models. Dissipation time (DT50) values ranged from 2.0 to 7.8 days, depending on matrix and experimental conditions. Transient increases in demethylated metabolite residues confirmed that the parent product was degraded in situ. No evidence of vertical mobility of any of the analytes was observed. 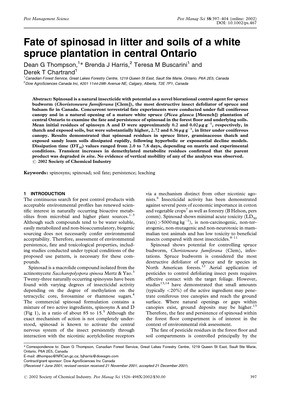