Bt-based biopesticides are among the main tactics for agricultural pest control in many production systems, mainly due to high efficiency and the ability to preserve natural enemies and the environment. North America (Canada and USA) and Brazil stand out as the two largest world markets for these products. The main targets are larvae of the spruce budworm (Choristoneura fumiferana) responsible for forest defoliation in Canada and the gypsy moth (Lymantria dispar) in the United States. Bt biopesticides have been used against these pests since the 1980s and represent the oldest IPM system using these products worldwide. The Brazilian example is more recent and involves two species of noctuids, Helicoverpa armigera and Chrysodeixis includens which became very serious problems in all agricultural areas. Bt biopesticides provided a satisfactory control efficiency, making Brazil a world reference. The total Bt biopesticide usage reached over 4.5 million liters/ kilograms in the 2013/2014 crop seasons, which corresponds to a sprayed area of approximately 9 million ha. Reasons for this increase, and subsequent decrease, in the Brazilian Bt biopesticides market are discussed in this chapter. 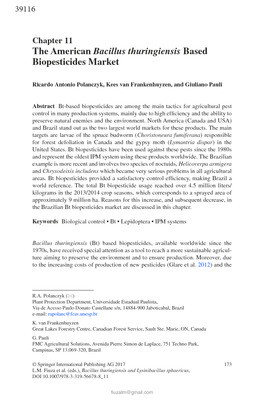