To rebuff attacks by parasitoids interfering with its development, the spruce budworm (SBW) is capable of encapsulating parasitoid eggs or making them turn black, thereby killing them. In this study, the researchers demonstrated that the process of encapsulating the eggs of the parasitoid Tranosema rostrale with SBW blood cells increased with the temperature.

The parasitoid wasp T. rostrale uses its stinger to lay its eggs under the skin of the SBW larvae. Once invaded by T. rostrale, the SBW ceases to develop at the sixth and final larval stage in reaction to a virus called polydnavirus (PDV), which is produced in the wasp’s ovary. 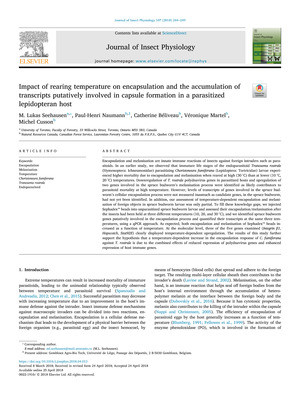