National forest inventories (NFI) provide estimates of forest resources at the national and regional level but are also increasingly used as basis for mapping forest resources based on remotely sensed data. Such maps procure local estimates of forest resources but may also improve precision of national and regional estimates. Supported by a countrywide airborne laser scanning (circa 2014) and a national land-use map (circa 2014), direct (DI), model-assisted (MA), and model calibrated (MC) estimates of wood volume (V) and aboveground biomass (AGB) densities in forest areas derived from the Danish NFI (2012–2016) are presented. Nonlinear models with three LiDAR metrics are used to predict V and AGB in forested areas. According to these models, the predicted values of V and AGB in sample plots missed in the field inventory was lower than in those visited in the field; we therefore opted for estimation with multiple (stochastic) imputations. MA estimates for the country suggested a 2% lower level of both V and AGB densities with errors 45% lower than estimated errors in DI results. National MC estimates were close to the DI estimates with an error approximately 40% lower than errors in DI estimates yet 5% greater than the MA estimates of error. Multiple imputations had the strongest impact on DI estimates, but only a weak impact on MA and MC results.

We demonstrate model-assisted and model-calibrated estimation of national and regional levels of stem volume and biomass from a national forestry supported by a census of LiDAR metrics. The design of the inventory called for a spatially balanced sample with permanent and temporary field plots measured across a five year measurement cycle (2012-2016). With the LiDAR data collected in 2014 it follows that there was a time-lapse of one or two years between field and LiDAR data in 4 out of five field plots. This lack of temporal synchrony lowered the variance effiency of the LiDAR auxiliary variables, yet overall the use of LiDAR lowered the sampling errors by approximately 25% compared to direct estimates with no use of the LiDAR data. The inventory had data missing not at random. To address missing values we implemented multiple imputations to encounter an otherwise positive bias in estimators that ignored the missing data issue. 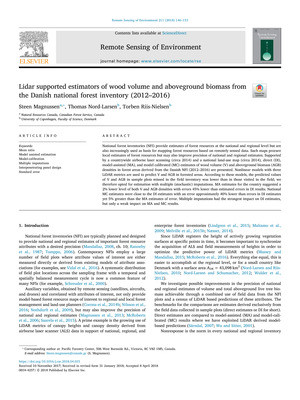