Fine-scale distribution of moisture in the surface of a degraded blanket bog and its effects on the potential spread of smouldering fire. 2017. Prat-Guitart, N.; Belcher, C.M.; Thompson, D.K.; Burns, P.; Yearsley, J.M. Ecohydrology 10(8):1-11.

During rain‐free periods, the water table in peatlands falls and the moisture content (MC) of top 10 cm, including the moss layer, depends upon the hydrophysical properties and the responses of the local composition of species to water deficit. Thus, the ecosystem becomes vulnerable to surface peat fires. The spread of such fires is often irregular; however, there is little understanding of how the fine‐scale variation of peat MC can affect the spread of smouldering fire.

We analyse the fine‐scale distribution of surface MC from a degraded blanket bog (i.e., horizontal intervals of 10 cm), thus indirectly analysing the effect of fine‐scale MC distribution on peat fire spread. We determine the relationship of vegetation and microtopography to the spatial distribution of near surface MC and the moisture gradient around patches of dry peat (less than 250% MC, moisture content in a dry mass basis). We found that the MC of the surface peat was distributed in clusters with dry patches (less than 250% MC) averaging 40 ± 15 cm in size. The MC gradient surrounding dry patches was 10 ± 7% MC cm-1. A mixed‐effects model showed that dry patches were associated with lawns (of feather moss or Sphagnum) and hummocks of feather moss. Our model showed that wet patches were associated with both hummocks and hollows of Sphagnum. Therefore, the characterization of the surface MC in a fine‐scale is critical if we are to understand the spread of fires in peatlands.

During rain-free periods, the water table in peatlands falls, and the surface peat becomes vulnerable to fire. The surface of deep organic peat soils dries unevenly during drought periods, producing distinct dry patches that are at the highest risk of deep combustion. Little is known about how fine-scale variations in the moisture content of peat can affect the spread of smouldering fire. In this study we examined the spatial patterns of dry surface patches in a fire-prone drained peatland environment in Ireland. We measured the moisture content in plots 1.5 metres across on eight days in 2013–2015. Dry patches were associated predominantly with lawns of feather moss and Sphagnum moss and hummocks of feather moss, and they typically measured 30–50 cm across. The moisture gradients we found in this study between dry patches and wet peat areas would affect the way in which fire would spread, resulting in the patchy burning observed anecdotally after wildfire. This study highlights the importance of understanding fine-scale peat conditions if we are to understand how smouldering fires spread in peatlands and to better estimate the firefighting resources required to extinguish these fires. 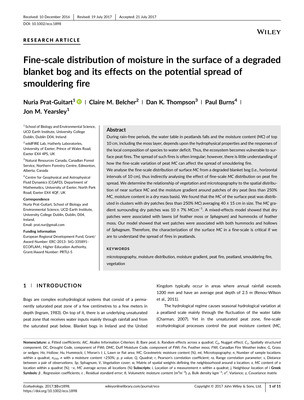