Purpose of Review. Climate change affects populations of forest insect pests in a number of ways. We reviewed the most recent literature (2013–2017) on this subject including previous reviews on the topic. We provide a comprehensive discussion of the subject, with special attention to insect range expansion, insect abundance, impacts on forest ecosystems, and effects on forest insect communities. We considered forest insects according to their major guilds and biomes.

Summary. Expansion of either the true range or the outbreak range is observed in several model species/groups of major insect guilds in boreal and temperate biomes. Mechanistic explanations are provided for a few species and are mainly based on increase in winter temperatures. In relation to insect abundance, climate change can either promote outbreaks or disrupt trophic interactions and decrease the severity of outbreaks. There is good evidence that some recent outbreaks of bark beetles and defoliating insects are influenced by climate change and are having a large impact on ecosystems as well as on communities of forest insects.

In this literature review (2013-2017), the researchers note that an expansion of epidemic distribution areas has been observed in several models for the majority of insects in boreal and temperate biomes. The increase in winter temperatures is held as the main cause. With respect to insect abundance, climate change can favour epidemics or cause disturbances in the food chain that can reduce the impact of epidemics. There is evidence that recent epidemics of borers and defoliating insects are affected by climate change and are impacting ecosystems and forest insect communities. 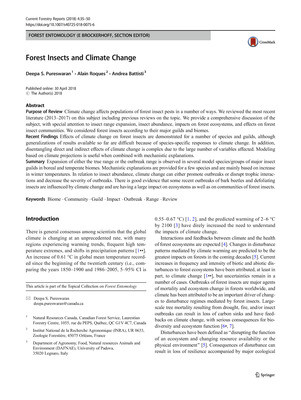