Persistent fire refugia, which are forest stands that have survived multiple fires, play an important ecological role in the resilience of mountainous forest ecosystems following disturbances. The loss of numerous refugia patches to large, high-severity fires in recent years is prompting the need to better understand drivers of fire refugia endurance. We investigate the role of topographic features on fire refugia survivorship based on pre-1950 fire regime conditions. Mapped refugia patches (n = 557) covering 28% of the forested landscape were used to develop three predictive models based on patch size (all sizes, <30 ha, <10 ha), as a function of explanatory variables describing several components of topography. Five topographic variables consistently favoured persistent fire refugia occurrence, though the ranking of explanatory variable importance varied among patch-size models. For the all-refugia model, elevation (23.7%), proportion of non-fuel at a 5000-m scale (20.3%), solar radiation (14.6%), Topographic Position Index at a 2000-m scale (10.1%), and distance from rivers (10.1%) were the top variables. The models’ predictive abilities were high, but decreased with larger patch sizes. We conclude that many suitable areas are currently unoccupied by fire refugia; that random elements affect their survivorship; and that additional environmental factors not considered in this study may contribute to their persistence. With changing climate and fire-regime conditions, careful fire and forest management considerations will be needed to limit future losses of persistent fire refugia forests.

In the Rocky Mountains of Alberta, there are forest stands that have escaped wildfires for centuries. These old-age forest patches play an important role in helping forest ecosystems in the mountains to recover after disturbance. Unfortunately, many of these stands, called fire refugia, have been lost in recent years to large, severe fires. The authors conducted a study to better understand which topographic features help fire refugia to survive in the Alberta Rockies. They found that fire refugia were more likely than other forest stands to be located at higher elevations and on slopes that receive less sun. Fire refugia were also more likely to be isolated from other forest stands by rocky ridges, lakes, or wetlands and to be located less than 5 km from rivers. Factors such as drought, erratic wind conditions, and warmer temperatures, combined with the unintended consequences of fire management policies over several decades to prevent and suppress forest fires, are producing large, severe fires that leave few unburned remnants. These research findings offer a benchmark against which to compare future trends. 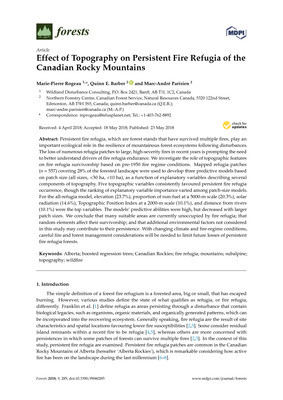