Using tree-ring analysis, we show that the dynamics of forest tent caterpillar [Malacosoma disstria (Hbn.)] outbreaks in Alberta, Canada shifted at the turn of the 20th century from cyclic, synchronous behaviour 1850-1910 to complex, asynchronous behavior 1910-1993. This shift in dynamics coincided with the emergence in 1910 of a latitudinal gradient in outbreak stability and periodic-ity reflecting a similar gradient in the periodicity of winter temperatures. We postulate that the synchronizing strength of winter temperatures has dimi-nished as a result of climate warming, and that any synchronizing strength due to inter-population migration has been superseded by regionalized pat-terns of periodic forcing caused by weak low-frequency variability in winter temperatures. We speculate that a decrease in polar vorticity at the start of the 20th century led to increased meridional jet stream flow and more frequent arctic weather anomalies, resulting in a loss of synchronous decadal periodic-ity in outbreak occurrence. These changes in insect disturbance probabilities, including rising uncertainty, have profound consequences for forest distur-bance risk management.

Climate affects forest insect outbreaks, including forest tent caterpillar in Alberta. Whereas it used to cycle synchronously in the 19th century, it started fluctuating aperiodically and asynchronously after 1910. Why? Changes in winter weather. 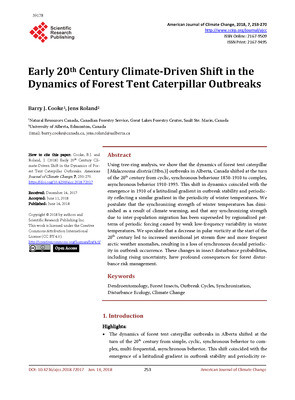