The North American boreal forest has been developing since the end of the last glaciation approximately 10,000 yr ago. With climate warming and human occupation, it is anticipated that fire danger, ignition, and activity will be increasing, compromising forests’ benefits for generations to come. In this study, we show, however, that a century of rapid climate changes and human densification has had the opposite effect in the boreal eastern interior of the North American continent, reducing biomass burning to values below two millennia of historical levels. A multi-millennial fire history was reconstructed for eight forested landscapes from the Lake of the Woods Ecoregion (LWE) located at the boreal–prairie ecotone. Fire history was reconstructed using a combination of archival (period 1920–2010), tree-ring (stand initiations and fire scars: period 1690–2010), and lake sediment charcoal (2500 BP to present) records. The archival record revealed recent large fires (>200 ha) in 1948, 1980, and 1988. An additional 19 fires were identified by the fire-scar record. Fire events in 1805, 1840, 1863, and the 1890s were identified in numerous locations around multiple lakes suggesting that they were of large extents. In accordance with the tree-ring record, the charcoal accumulation rate (CHAR) peak record generally identified the major fires but tended to lag from the tree-ring records by several decades. Within LWE, the long-term charcoal record revealed that CHAR was higher for each lake in the earlier portion of the record including the warm Medieval Climate Anomaly (AD -900 to AD 1000), followed by a progressive decrease toward the cool Little Ice Age period. This decline was abruptly interrupted in the mid- to late 19th century with large synchronized fires, also reported over western and central North America, and resumed approximately four decades later. Fire disturbance level is today below the historical range, despite the accentuated climate warming. Aging of the forest landscape may create biodiversity loss notably in fire-adapted species while at the same time setting the tone for major fires in upcoming decades if no action is taken for managing fuels.

North America’s boreal forest developed after the last glaciation, approximately 10,000 years ago. With climate change and increased human occupation of the territory, a higher risk of forest fires is anticipated, which could compromise the benefits expected from forests for future generations.

However, in this study, the researchers found that over the last century, fast climate changes and the densification of human occupation of the territory had the opposite effect over the area studied (Ontario and Manitoba). First, they observed a decrease in the amount of wood burned over the last 2,500 years. This fire decrease was briefly interrupted in the middle of the 19th century, which was marked by a sharp increase in fire activity. The amount of biomass burned began to gradually decrease again around the 1930s, a trend that has continually increased since then. The number of fires is now below historical levels, despite the increase in global warming. The aging of the forest landscape, which is a consequence of this reduction in disturbances, could lead to biodiversity losses, particularly among species adapted to fire, while contributing to the emergence of major fires over the next decades if measures are not taken to manage combustible materials.

To reach these findings, the researchers reconstructed the fire history by going through archives (1920-2010) and by analyzing tree rings (1690-2010) (dendrochronology) and coal sediments from lakes. 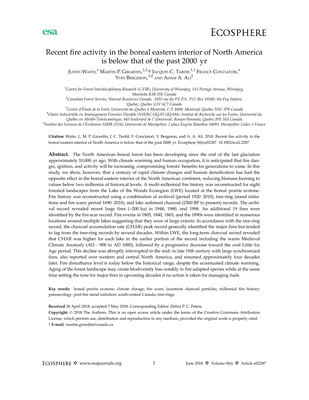