One hundred and sixty-two lodgepole pine (Pinus contorta var. latifolia) and 162 Douglas-fir (Pseudotsuga menziesii var. glauca) seedlings were excavated in a clearcut north of Golden to ascertain the impact of skidroad construction and stump uprooting on the development and form of tree roots and the relationship of root morphology to tree growth. Equal numbers of trees were excavated from five disturbance categories in the skidroad plots and three disturbance categories in the stump uprooting plots. The size of the root systems were measured using a modified “root area” method.
Seedlings planted in excavated or gouged tracks generally develop root systems inferior to those in undisturbed ground or in deposits. Seedlings in tracks tended to concentrate root production in the upper 10 cm of mineral soil and there was a sharp reduction in rooting below this depth. For Douglas-fir, total root area of trees planted in the inner skidroad tracks was significantly lower than that of trees planted in undisturbed soil or in those skidroad categories with looser soil. Stump uprooting had less of an impact on root systems than skidroad construction and use; the inner track of skidroads had a particularly strong impact on root systems.

Poor root development and consequent low root area, as encountered in the inner track of skidroads and stump uprooting tracks, resulted in reduced tree growth. This was evidenced by positive correlations between root area and tree diameter, height and crown width. Lodgepole pine trees with J-shaped or L-shaped root systems had significantly reduced tree height on skidroads. Douglas-fir trees with well developed taproots had significantly greater tree diameter and tree volume on skidroads and greater tree height in the stump uprooting area than those without taproots.

On skidroads, the best planting spot for lodgepole pine was either the berm or the sidecast. The best planting spot for Douglas-fir on skidroads was the outer track followed by the berm. Using the Soil Conservation Guidelines maximum allowable area in skidroads (13%), unfavorable planting areas would comprise 6% and 3% of the harvested area for lodgepole pine and Douglas-fir, respectively. In stump uprooting areas, the deposits were the best planting spots for both species. Based on the amount of stump uprooting disturbance with deposits and tracks on this site for both tree species, 34% of the clearcut was unsuitable for planting. 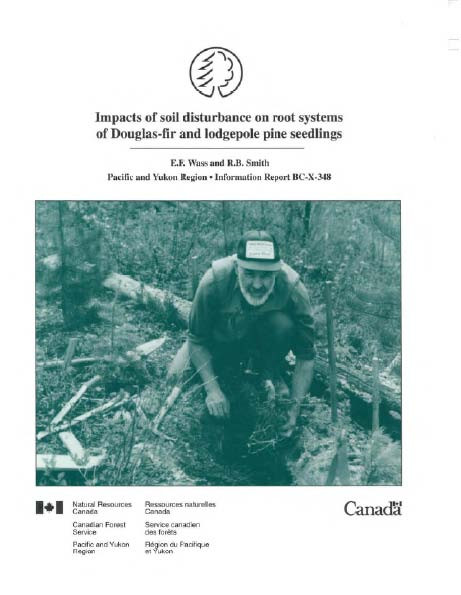