Background: Transposable elements (TEs) are common and often present with high copy numbers in cellular genomes. Unlike in cellular organisms, TEs were previously thought to be either rare or absent in viruses. Almost all reported TEs display only one or two copies per viral genome. In addition, the discovery of pandoraviruses with genomes up to 2.5-Mb emphasizes the need for biologists to rethink the fundamental nature of the relationship between viruses and cellular life.

Results: Herein, we performed the first comprehensive analysis of miniature inverted-repeat transposable elements (MITEs) in the 5170 viral genomes for which sequences are currently available. Four hundred and fifty one copies of ten miniature inverted-repeat transposable elements (MITEs) were found and each MITE had reached relatively large copy numbers (some up to 90) in viruses. Eight MITEs belonging to two DNA superfamilies (hobo/Activator/Tam3 and Chapaev–Mirage–CACTA) were for the first time identified in viruses, further expanding the organismal range of these two superfamilies. TEs may play important roles in shaping the evolution of pandoravirus genomes, which were here found to be very rich in MITEs. We also show that putative autonomous partners of seven MITEs are present in the genomes of viral hosts, suggesting that viruses may borrow the transpositional machinery of their cellular hosts’ autonomous elements to spread MITEs and colonize their own genomes. The presence of seven similar MITEs in viral hosts, suggesting horizontal transfers (HTs) as the major mechanism for MITEs propagation. Conclusions: Our discovery highlights that TEs contribute to shape genome evolution of pandoraviruses. We concluded that as for cellular organisms, TEs are part of the pandoraviruses’ diverse mobilome.

In this study, the researchers performed the first complete analysis of inverted-repeat transposable elements from over 5000 viral genomes. These elements are DNA sequences whose position can change within the genome. This was the first time these elements were identified in viruses. Their discovery highlights the idea that transposable elements contribute to modelling the evolution of the genome of pandoraviruses, a “giant virus” family, and polydnaviruses, which are transmitted to moth caterpillars (e.g., spruce budworm) by parasitic wasps. 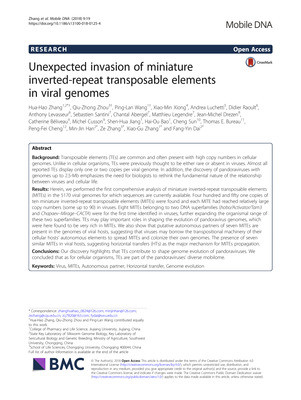