A field project was conducted to observe and measure smoke plumes from wildland fires in Alberta. This study used handheld inclinometer measurements and photos taken at lookout towers in the province. Observations of 222 plumes were collected from 21 lookout towers over a 6-year period from 2010 to 2015. Observers reported the equilibrium and maximum plume heights based on the plumes' final levelling heights and the maximum lofting heights, respectively.

Observations were tabulated at the end of each year and matched to reported fires. Fire sizes at assessment times and forest fuel types were reported by the province. Fire weather conditions were obtained from the Canadian Wildland Fire Information System (CWFIS). Assessed fire sizes were adjusted to the appropriate size at plume observation time using elliptical fire-growth projections.

Though a logical method to collect plume observations in principle, many unanticipated issues were uncovered as the project developed. Instrument limitations and environmental conditions presented challenges to the investigators, whereas human error and the subjectivity of observations affected data quality. Despite these problems, the data set showed that responses to fire behaviour conditions were consistent with the physical processes leading to plume rise. 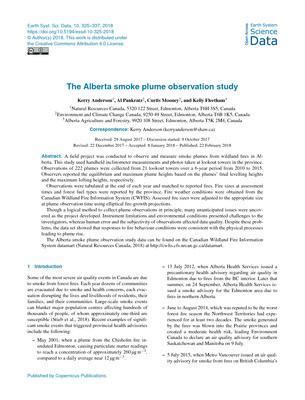