The destructive nature of the  ∼  590 000 ha Horse river wildfire in the Western Boreal Plain (WBP), northern Alberta, in May of 2016 motivated the investigation of the hydrometeorological conditions that preceded the fire. Historical climate and field hydrometeorological data from a moderate-rich fen watershed were used to (a) identify whether the spring 2016 conditions were outside the range of natural variability for WBP climate cycles, (b) explain the observed patterns in burn severity across the watershed, and (c) identify whether fall and winter moisture signals observed in peatlands and lowland forests in the region are indicative of wildfire. Field hydrometeorological data from the fen watershed confirmed the presence of cumulative moisture deficits prior to the fire. Hydrogeological investigations highlighted the susceptibility of fen and upland areas to water table and soil moisture decline over rain-free periods (including winter), due to the watershed's reliance on supply from localized flow systems originating in topographic highs. Subtle changes in topographic position led to large changes in groundwater connectivity, leading to greater organic soil consumption by fire in wetland margins and at high elevations. The 2016 spring moisture conditions measured prior to the ignition of the fen watershed were not illustrated well by the Drought Code (DC) when standard overwintering procedures were applied. However, close agreement was found when default assumptions were replaced with measured duff soil moisture recharge and incorporated into the overwintering DC procedure. We conclude that accumulated moisture deficits dating back to the summer of 2015 led to the dry conditions that preceded the fire. The infrequent coinciding of several hydrometeorological conditions, including low autumn soil moisture, a modest snowpack, lack of spring precipitation, and high spring air temperatures and winds, ultimately led to the Horse river wildfire spreading widely and causing the observed burn patterns. Monitoring soil moisture at different land classes and watersheds would aid management strategies in the production of more accurate overwintered DC calculations, providing fire management agencies early warning signals ahead of severe spring wildfire seasons.

The impact of the 2016 Fort McMurray wildfire on humans has been widely documented, but the environmental factors that contributed to such extreme wildfire behavior so early in the fire season are less well understood. In this study we utilized environmental monitoring data collected through the winter of 2016 and other hydrological monitoring undertaken nearby for mine reclamation research to better understand the state of fuel moisture during the Fort McMurray wildfire. Specifically, we examined data used to monitor a natural valley-bottom wetland watershed and adjacent forest area about 15 km north of the Fort McMurray townsite. We found that the extreme fire behavior observed in 2016 was not due to any sort of drought in the area; rather, the low moisture content in the fuel for the fire in the spring of 2016 was due primarily to the very early date of snowmelt, coupled with near-zero rainfall after snowmelt until the fire’s ignition. Increased vigilance and careful monitoring of spring fuel moisture conditions is recommended as soon as the snow melts, which often occurs before May 1st (the standard starting date for firefighting staff). 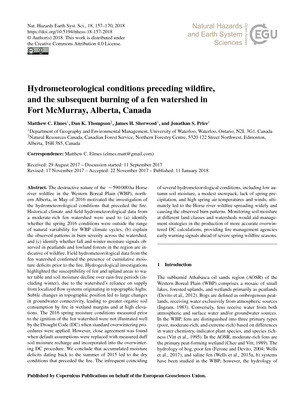