Negative density-dependent population regulation in exploitative species is well studied. Positive density-dependence can arise if exploiters must cooperate to obtain access to well-defended resources. Most studies, however, focus on the first type of density-dependence at the expense of the other. Using a parasitoid-host model, we explored how positive density-dependence driven by host defenses in combination with negative density-dependence due to competition for resources impact transient population dynamics. Inspired by interactions between the mountain pine beetle and its pine hosts, we formulated a model of enemy-victim interactions in discrete-time in which the victim is capable of deadly self-defense against exploitation. We fitted the model to data and then analyzed its non-equilibrium dynamics to determine what conditions promote boom-bust dynamics. When present together, strong Allee effects and overcompensating competition for resources among exploiters can cause their populations to irrupt and then crash even though many exploitable resources remain. Accelerating population irruptions followed by precipitous collapse occur for realistic parameter values of our model of mountain pine beetle dynamics. Insect dynamics are often dominated by sudden irruptions and collapses on short time scales. Population crashes in exploitative species often happen enigmatically even when exploitable resources are not depleted. Herein, we argue that strong Allee effects in combination with overcompensation provide a plausible explanation for these boom-bust dynamics in some species.

An outbreak of the mountain pine beetle that began in British Columbia in the early 1990s has resulted in the loss of millions of hectares of forest . The factors that cause beetle populations to expand and decline are not fully understood . In this study, the authors developed a mathematical model to explore how populations of beetles change in the short term as the beetles attack trees. Trees can initially defend themselves by producing a toxic resin, but their natural defenses can be overwhelmed as more beetles start to feed on them . As more beetles are hatched and their population continues to increase, the beetles are faced with increasing competition from each other for food. Earlier models did not include the effect of beetle competition. With their model, the authors found that in the short term there can be dramatic boom– bust dynamics in mountain pine beetle populations, something that the earlier models were not able to predict. This study’s findings suggest that it may be possible to cause beetle populations to crash by removing some of their potential host trees and forcing the beetles to become overcrowded on the remaining trees. 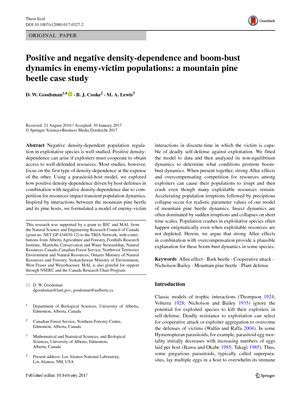