Warming in the boreal forest region has already led to changes in the fire regime. This may result in increasing fire frequency or severity in peatlands, which could cause these ecosystems to shift from a net sink of carbon (C) to a net source of C to the atmosphere. Similar to C cycling, peatlands serve as a net sink for mercury (Hg), which binds strongly to organic matter and accumulates in peat over time. This stored Hg is also susceptible to re-release to the atmosphere during peat fires. Here we investigate the physical properties that influence depth of burn in experimental peat columns and the resulting emissions of CO, CO2, CH4, and gaseous and particulate Hg. As expected, bulk density and soil moisture content were important controls on depth of burn, CO2 emissions, and CO emissions. However, our results show that CH4 and Hg emissions are insensitive to combustion temperature or fuel moisture content. Emissions during the burning of peat, across a wide range of moisture conditions, were associated with low particulate Hg and high gaseous Hg release. Due to strong correlations between total Hg and CO emissions and because high Hg emissions occurred despite incomplete combustion of total C, our results suggest that Hg release during peat burning is governed by the thermodynamics of Hg reduction more so than by the release of Hg associated with peat combustion. Our measured emissions ratios, particularly for CH4:CO2, are higher than values typically used in the upscaling of boreal forest or peatland fire emissions. These emission ratios have important implications not only for our understanding of smouldering chemistry, but also for potential influences of peat fires on the Earth's climate system.

Over time, large quantities of mercury have accumulated in boreal forest peatlands. During wildfires, this mercury can be released, contaminating aquatic food chains that support fish stocks used by humans. In lab experiments we burned boreal peat from central Alberta to determine whether the released mercury is attached to smoke and soot particles or else is emitted in the gas phase; this is an important factor affecting how far mercury contamination will travel during a wildfire. We also examined whether any more easily measured carbon emissions (such as carbon dioxide or carbon monoxide emissions) are related to mercury emissions. Across a wide range of moisture contents and combustion rates, we found that gaseous mercury emissions are responsible for 97% of total emissions and that these emissions are most highly correlated with carbon monoxide emissions. Because most of the mercury emissions are in the gas phase, the mercury released into the atmosphere is likely to be dispersed very widely, potentially affecting distant ecosystems such as oceans more than nearby terrestrial ecosystems. Carbon monoxide irregularities downwind from large boreal wildfires can be tracked via satellite and can provide some clue about the areas affected by increased deposits of mercury. Our results identify a potential way to track mercury emissions via carbon monoxide emissions. 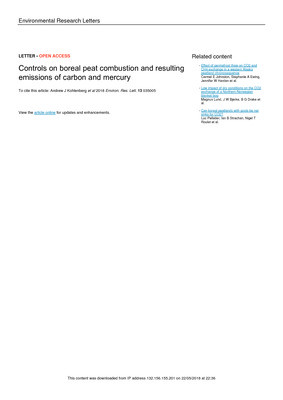