Landscape-level disturbance is a reality in many parts of the world including the Athabasca oil sands region, Canada, and soils play an essential part in the overall reclamation process. Soils are reconstructed during reclamation to provide a foundation and a nutrient source for the novel ecosystems. However, reclamation is often monitored through structural indicators of soil quality, which may not reflect dynamic ecosystem functions such as nutrient cycling. Our objective was to determine if nutrient cycling was occurring on novel ecosystems and if standard structural measures of soil quality were appropriate indicators. We assessed soil quality and nitrogen cycling in reclaimed, harvested and undisturbed aspen forest sites following the addition of 15N-labelled aspen (Populus tremuloides Michx.) leaf litter to the soil surface. Structural soil quality indicators, including soil moisture and microbial carbon and nitrogen biomass, were higher on the undisturbed site, whereas soil microbial composition differed among sites. Yet, uptake of 15N by microbes and plants, which continued throughout the 52 mo field incubation, was comparable across all sites. These results indicate that differences in structural attributes between disturbed and undisturbed soils do not necessarily translate into differences in soil functioning related to nitrogen cycling. Instead, this case study supports exploring the use of stable isotope tracers to assess dynamic soil function indicators in reclaimed ecosystems. Being able to follow biogeochemical cycling as vegetation becomes established and new forests start to develop following reclamation is key to assessing the long-term sustainability of these novel ecosystems.

In the reclamation of mines (including the Athabasca Oil Sands Region of Canada) soils are constructed according to soil cover designs and evaluated based on physical and biochemical properties. However, for these soils to sustainably support forests, nutrient cycling is critical. A concern is that constructed soils will be depleted of nitrogen over time as the added organic material decomposes. Using 15N-labelled plant residues, this study traced nitrogen in soils of reclaimed, harvested and undisturbed forest sites. Results showed that the added 15N was incorporated into soil microorganisms and the roots and above-ground portions of vegetation in all of the sites. This demonstrated that, regardless of differences in physical and biochemical properties, soil nutrient cycling was comparable among sites. 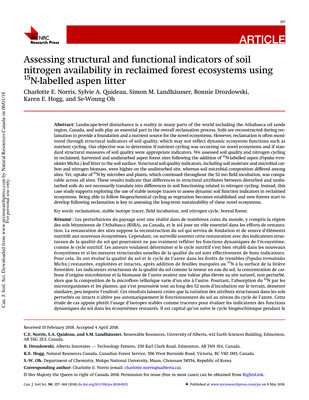