Warmer climates are predicted to increase bark beetle outbreak frequency, severity, and range. Even in favourable climates, however, outbreaks can decelerate due to resource limitation, which necessitates the inclusion of competition for limited resources in analyses of climatic effects on populations. We evaluated several hypotheses of how climate impacts mountain pine beetle reproduction using an extensive nine-year dataset, in which nearly 10,000 trees were sampled across a region of approximately 90,000 km2, that was recently invaded by the mountain pine beetle in Alberta, Canada. Our analysis supports the hypothesis of a positive effect of warmer winter temperatures on mountain pine beetle overwinter survival and provides evidence that the increasing trend in minimum winter temperatures over time in North America is an important driver of increased mountain pine beetle reproduction across the region. Although we demonstrate a consistent effect of warmer minimum winter temperatures on mountain pine beetle reproductive rates that is evident at the landscape and regional scales, this effect is overwhelmed by the effect of competition for resources within trees at the site level. Our results suggest that detection of the effects of a warming climate on bark beetle populations at small spatial scales may be difficult without accounting for negative density-dependence due to competition for resources. 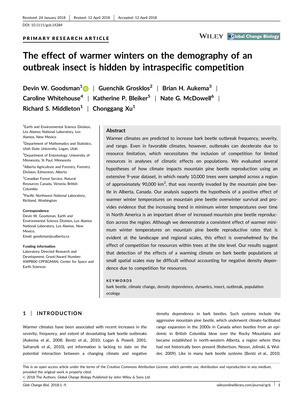