Fire as a dominant disturbance has profound implications on the terrestrial carbon cycle. We present the first ever multi-decadal, spatially-explicit, 30 meter assessment of fire regimes across the forested ecoregions of Canada at an annual time-step. From 1985 to 2015, 51 Mha burned, impacting over 6.5% of forested ecosystems. Mean annual area burned was 1,651,818 ha and varied markedly (σ = 1,116,119), with 25% of the total area burned occurring in three years: 1989, 1995, and 2015. Boreal forest types contained 98% of the total area burned, with the conifer-dominated Boreal Shield containing one-third of all burned area. While results confirm no significant national trend in burned area for the period of 1985 to 2015, a significant national increasing trend (α = 0.05) of 11% per year was evident for the past decade (2006 to 2015). Regionally, a significant increasing trend in total burned area from 1985 to 2015 was observed in the Montane Cordillera (2.4% increase per year), while the Taiga Plains and Taiga Shield West displayed significant increasing trends from 2006 to 2015 (26.1% and 12.7% increases per year, respectively). The Atlantic Maritime, which had the lowest burned area of all ecozones (0.01% burned per year), was the only ecozone to display a significant negative trend (2.4% decrease per year) from 1985 to 2015. Given the century-long fire return intervals in many of these ecozones, and large annual variability in burned area, short-term trends need to be interpreted with caution. Additional interpretive cautions are related to year used for trend initiation and the nature and extents of spatial regionalizations used for summarizing findings. The results of our analysis provide a baseline for monitoring future national and regional trends in burned area and offer spatially and temporally detailed insights to inform science, policy, and management. 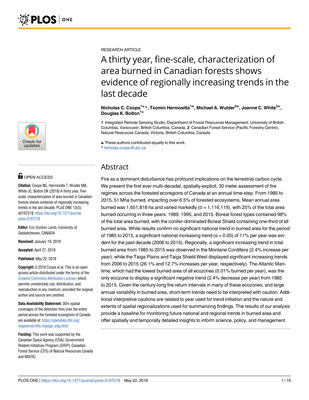