Canada’s forests are shaped by disturbances such as fire, insect outbreaks, and droughts that often overlap in time and space. The resulting cumulative disturbance risks and potential impacts on forests are generally not well accounted for by models used to predict future impacts of disturbances on forest. This study aims at projecting future cumulative effects of four main natural disturbances, fire, mountain pine beetle, spruce budworm and drought, on timber volumes across Canada’s forests using an approach that accounts for potential overlap among disturbances. Available predictive models for the four natural disturbances were used to project timber volumes at risk under aggressive climate forcing up to 2100. Projections applied to the current vegetation suggest increases of volumes at risk related to fire, mountain pine beetle, and drought over time in many regions of Canada, but a decrease of the volume at risk related to spruce budworm. When disturbance effects are accumulated, important changes in volumes at risk are projected to occur as early as 2011–2041, particularly in central and eastern Canada. In our last simulation period covering 2071–2100, nearly all timber volumes in most of Canada’s forest regions could be at risk of being affected by at least one of the four natural disturbances considered in our analysis, a six-fold increase relative to the baseline period (1981–2010).Tree species particularly vulnerable to specific disturbances (e.g., trembling aspen to drought) could suffer disproportionate increases in their volume at risk with potential impacts on forest composition. By 2100, estimated wood volumes not considered to be at risk could be lower than current annual timber harvests in central and eastern Canada. Current level of harvesting could thus be difficult to maintain without the implementation of adaptation measures to cope with these disturbances.

In this study, the researchers simulated the evolution of the impact resulting from four types of natural disturbance (fire, mountain pine beetle, spruce budworm and drought) on timber volumes based on the worst-case climate change scenario. For the overall period examined (1981-2100), potential losses due to the mountain pine beetle, fire and drought increased, while those associated with the spruce budworm decreased. The cumulative effect of these changes could have a major impact throughout the 2011–2041 period, particularly in central Canada and central Quebec. For the 2071–2100 period, nearly all Canadian timber volumes (90-100%) risk being affected by a disturbance of some kind. This represents a level of risk six times higher than that experienced during the 1981–2010 period. Also according to this study, by the end of the 21st century, timber volumes in central and eastern Canadian regions that have not experienced a disturbance will be lower than those currently being harvested. In light of these results, the researchers concluded that it would be difficult to maintain harvest rates at their current level unless regional adaptation measures are implemented. 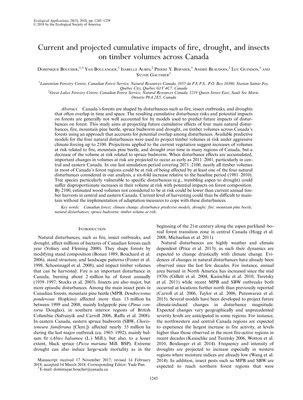