In the boreal forest, open lichen woodlands have been described as an alternative stable state to closed crown feather moss forest. In this study, we addressed the role of terricolous lichens in stabilizing open woodlands by hindering tree regeneration and/or growth. Based on field and greenhouse experiments, we compared germination and growth of jack pine (Pinus banksiana) on feather mosses (primarily Pleurozium schreberi) and lichens (primarily Cladonia stellaris), using bare mineral soil as a control. Drivers were investigated by (1) manipulating nutrient supply, (2) simulating shade of a closed canopy on the ground layer with the assumption this would mitigate lichen influence on pine growth, and (3) examining pine root ectomycorrhizal colonization and diversity as indicators of pine ability to take up nutrients. Total growth of 6-month-old greenhouse and 2–3-year-old field seedlings, as well as belowground growth of 2-year-old greenhouse seedlings, was significantly greater in moss than in lichen. Seed germination was not affected by ground cover type. Although field phosphorus and base cation availability was greater in mosses than in lichens, fertilization did not entirely compensate for the negative effects of lichens on pine growth in the greenhouse. Ground layer shading had no impact on pine growth. Lichens were associated with reduced abundance and modified composition of the root ectomycorrhizal community. By suggesting that terricolous lichens constitute a less favorable growth substrate than mosses for pine, our results support the hypothesis that lichens contribute to open woodland stability in the potentially closed-crown feather moss forest.

In this paper, the researchers studied the effect of the growth medium on the germination and growth of jack pine Whether in a greenhouse or in the field, jack pine germination was little affected by the growth medium, but it was significantly higher in environments containing mosses than in those containing lichens. In fact, environments containing lichens provided fewer nutrients to the seedlings and did not favour the development of mycorrhizae, a type of fungi that are beneficial to the development and growth of trees.

Over the last 50 years, lichen woodlands have increased in the boreal forest. In light of this study, the researchers concluded that lichens limit the growth of jack pine seedlings, hence favouring the expansion of lichen woodlands. 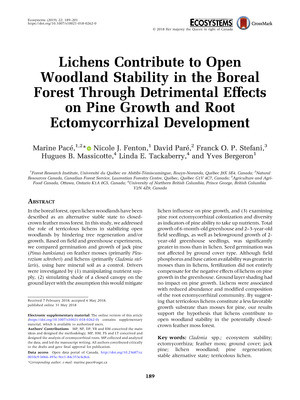