More than a decade after its discovery in North America, the European woodwasp, Sirex noctilio F., has not been an aggressive tree killer in northeastern pine forests. Concern that S. noctilio has potential to become a more aggressive pest as it spreads south, or as environmental conditions change, is warranted, because it has caused extensive pine losses in other areas that it has invaded. We observed S. noctilio impact and attack behavior in eight pine stands throughout Ontario annually for a five-year period. Sirex noctilio activity did not change appreciably between 2012 and 2016. Sirex noctilio killed 3 – 48% of pine stems, and 3 – 36% of pine basal area. Most S. noctilio-caused mortality was limited to suppressed and intermediate trees. Of the 17% of pines in the entire study that were attacked and/or killed by S. noctilio, many (44%) were attacked in multiple years. Depending on the year, between 46 and 79% of trees remained alive in the year immediately after attack, which suggests that many study trees were at least initially resistant to attack by S. noctilio. Though its impact appears to be limited in these forests for now, we recommend that observations continue in future years. 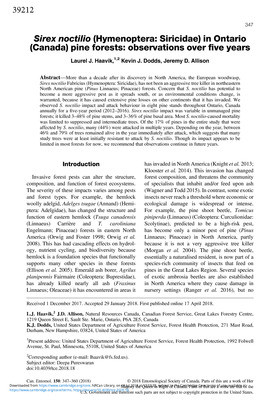