Wood Turtles are a forest-dependent species, listed internationally, federally and provincially as being at risk. Approximately 30% of the global distribution of the species is considered to be in Canada, where disjunct populations occur across the eastern boreal transition zone in several provinces. In this paper, we report results derived from a three-year study involving integration of advanced monitoring and dynamic movement modeling techniques to provide detailed description of movement and habitat use by Wood Turtles. The study involved monitoring of 48 different adult turtles selected from two independent populations occurring within the Algoma District at the northwestern periphery of the species range in Canada. Results demonstrated the propensity for conventional radio-telemetry techniques to underestimate cumulative distances moved and to overestimate the amount of habitat used by Wood Turtles. GPS-telemetry provided rich datasets demonstrating Wood Turtle movement and habitat use at fine scales of space and time. Results show that Wood Turtles typically remain in very close proximity to rivers, show strong multi-year fidelity to particular sites within defined core activity areas and move extensively through their habitat in ways that differ between sexes. The combinatorial approach using these advanced technologies provides new, probability-based, information on movement and habitat use by Wood Turtles that can be used to better inform decision making on habitat protection requirements in forested watersheds The data also demonstrate that protected Areas of Concern as currently delineated for these two specific populations of Wood Turtles are likely to be effective in their conservation and provide significantly improved, spatially-explicit knowledge that can be used to inform further mitigation should any such efforts be considered necessary. 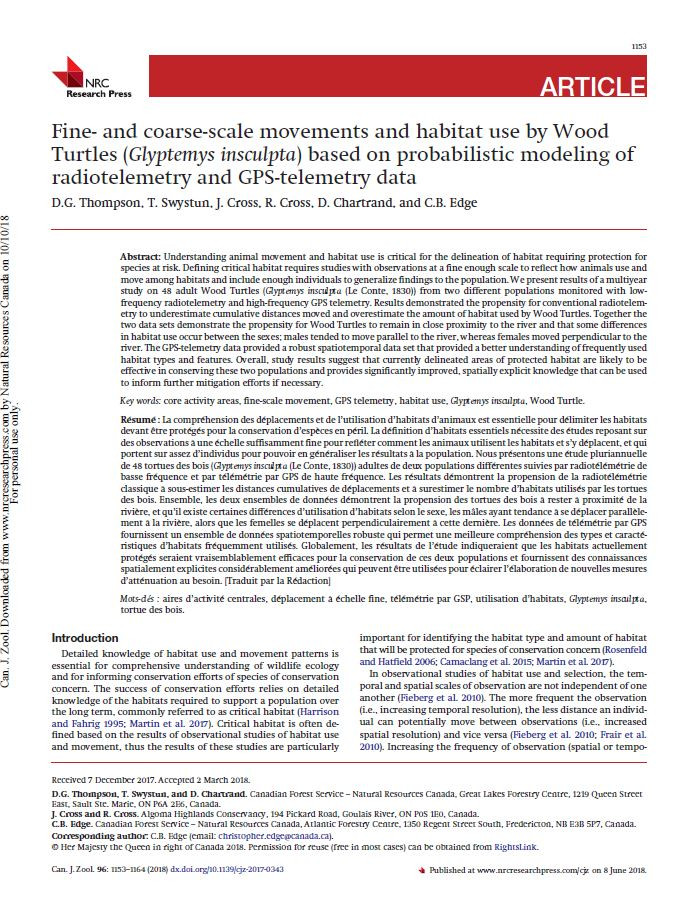