Background During an inventory of insect diversity on Anticosti Island in 1993, we caught unprecedented numbers of Neospondylis upiformis (Mannerheim), a longhorned beetle rarely observed in eastern North America. All specimens were caught using 12-funnel Lindgren traps baited with 95% ethanol and α-pinene. This longhorned beetle was captured again in 2007 on Anticosti with the same traps. Other than that, seven specimens of N. upiformis were caught elsewhere in Quebec between 1993 and 2015. Only 14 specimens were found in the 45 most important insect collections of the province, the most recent specimen dating back to 1964.

New information At least 90% of the captures came from old-growth balsam fir stands of the south-central part of the island. Seasonal flight activity ranged from early June to late July, but adult captures peaked in early July. Results suggest that Anticosti Island might be a hot spot for N. upiformis in eastern North America, particularly in its south-central part where old-growth balsam fir forests still exist.

In 1993 and 2007, the researchers collected a significant number of Neospondylis upiformis (Mannerheim) – an insect rarely observed in eastern North America – on Anticosti Island. Only seven specimens of N. upiformis have been caught elsewhere in Quebec between 1993 and 2015.

These results suggest that Anticosti Island could be a hot spot for N. upiformis in eastern North America, particularly in the south-central region where old-growth balsam fir forests are present.

It should be noted that only 14 specimens have been found in the 45 largest insect collections in Quebec, the most recent onedating back to 1964. 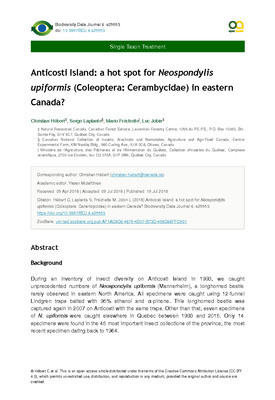