Forty new provincial records, including two new aleocharine species for the province of Manitoba (Coleoptera: Staphylinidae) are provided. The two new species, Acrotona manitobensis Klimaszewski and Godin, new species, and Atheta manitobae Klimaszewski and Godin, new species, are described and illustrated. Habitat information and new locality records are provided for the newly recorded species. The current number of Aleocharinae in Manitoba stands at 120 species, including 40 new records and two new species described here. A checklist of all currently recorded species from the province, with their distribution records in Canada and USA, is included.

In this article, the researchers present 40 new records of species discovered in Manitoba, including two new beetle species belonging to the Staphylinidae family.

Researchers describe and illustrate these two new insect species. The habitat and geographic coordinates of the 40 species are also presented. Taxonomy is a science that classifies living organisms. It is mainly used in biodiversity studies or in assessments of the impact of human activities on forest ecosystems. 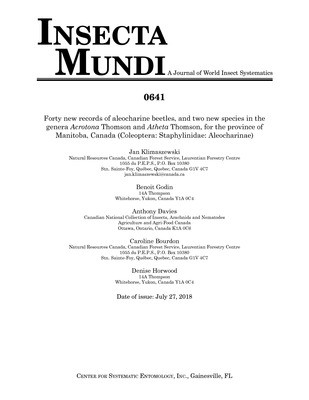