Genome structure characterization can contribute to a better understanding of processes such as adaptation, speciation, and karyotype evolution, and can provide useful information for refining genome assemblies. We studied the genome of an important North American boreal forest pest, the spruce budworm, Choristoneura fumiferana, through a combination of molecular cytogenetic analyses and construction of a high-density linkage map based on single nucleotide polymorphism (SNP) markers obtained through a genotyping-by-sequencing (GBS) approach. Cytogenetic analyses using fluorescence in situ hybridization methods confirmed the haploid chromosome number of n = 30 in both sexes of C. fumiferana and showed, for the first time, that this species has a WZ/ZZ sex chromosome system. Synteny analysis based on a comparison of the Bombyx mori genome and the C. fumiferana linkage map revealed the presence of a neo-Z chromosome in the latter species, as previously reported for other tortricid moths. In this neo-Z chromosome, we detected an ABC transporter C2 (ABCC2) gene that has been associated with insecticide resistance. Sex-linkage of the ABCC2 gene provides a genomic context favorable to selection and rapid spread of resistance against Bacillus thuringiensis serotype kurstaki (Btk), the main insecticide used in Canada to control spruce budworm populations. Ultimately, the linkage map we developed, which comprises 3586 SNP markers distributed over 30 linkage groups for a total length of 1720.41 cM, will be a valuable tool for refining our draft assembly of the spruce budworm genome.

In this study, researchers confirmed that the spruce budworm (SBW) has 30 pairs of chromosomes and, for the first time, that the species has sexual chromosomes that are characteristic of moths (WZ/ZZ).

In addition, analyses showed that the structure of the SBW genome encourages the rapid selection and propagation of resistance to B.t.k., the main insecticide used in Canada to control this pest’s populations.

Finally, researchers have developed a genetic linkage map comprising over 3500 markers. This map is an important tool for refining the draft of the ongoing assembly of the SBW genome. 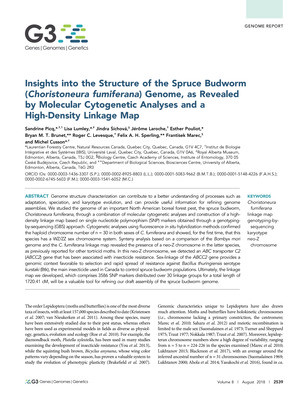