Boreal forests subject to low fire activity are complex ecosystems in terms of structure and dynamics. They have a high ecological value as they contain important proportions of old forests that play a crucial role in preserving biodiversity and ecological functions. They also sequester important amounts of carbon at the landscape level. However, the role of time since fire in controlling the different processes and attributes of those forests is still poorly understood. The Romaine River area experiences a fire regime characterized by very rare but large fires and has recently been opened to economic development for energy and timber production. In this study, we aimed to characterize this region in terms of live aboveground biomass, merchantable volume, stand structure and composition, and to establish relations between these attributes and the time since the last fire. Mean live aboveground biomass and merchantable volume showed values similar to those of commercial boreal coniferous forests. They were both found to increase up to around 150 years after a fire before declining. However, no significant relation was found between time since fire and stand structure and composition. Instead, they seemed to mostly depend on stand productivity and non-fire disturbances. At the landscape level, this region contains large amounts of biomass and carbon stored resulting from the long fire cycles it experiences. Although in terms of merchantable volume these forests seemed profitable for the forest industry, a large proportion were old forests or presented structures of old forests. Therefore, if forest management was to be undertaken in this region, particular attention should be given to these old forests in order to protect biodiversity and ecological functions. Partial cutting with variable levels of retention would be an appropriate management strategy as it reproduces the structural complexity of old forests.

In this study, the researchers analyzed the boreal forest surrounding the Romaine River in Quebec’s North Shore region in terms of its live aboveground biomass, merchantable volume, stand structure and stand composition. In addition, they studied the relationships between these characteristics and the time elapsed since the last forest fire. The region has recently been opened to the economic development of hydroelectricity production and logging.

The average live aboveground biomass and the merchantable volume were similar to those found in commercial boreal forests. These two characteristics were on the rise until approximately 150 years after fire, after which they began declining. However, no significant relationship was found between the time elapsed since fire and the stand’s structure or composition. In fact, the two elements appeared to result from stand productivity and other natural disturbances, such as insect epidemics or windthrow.

From a forest management point of view, special attention should be paid to old forests, which occupy a large proportion of the territory, in order to protect the biodiversity and ecological functions of those forests. Disturbances other than fire should also be monitored, as they seem to play an important role in forest dynamics. In conclusion, the large amounts of carbon stored in those forests as a result of the long fire cycles should be taken into consideration whenever operations that involve flooding the area or harvesting carbon are carried out. 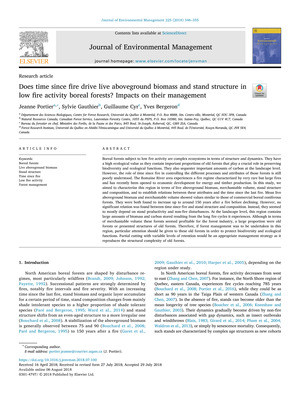