A total of 252 aerial spore samples from the provinces of Quebec and Ontario were obtained during an extensive research program focusing on aerobiology of fungal spores. Samples were collected on 95 sticky rods from rotary arm spore collectors and 157 filters from passive rain collectors. DNA from samples was PCR-amplified for fungal ribosomal ITS and sequenced using High Throughout Sequencing (HTS) methods. After bioinformatics analysis of DNA sequences, the presence of Diplodia corticola, an emerging tree pathogen in North America, was observed. In total, 313 DNA sequence reads from aerial spores of D. corticola were found in the Illumina data set, and 199 DNA sequence reads were obtained from the Ion Torrent data set. DNA of D. corticola was found in 16 of the 32 sampled sites, always less than 10 reads per site, with the exception of three sites - Quebec City, Aylmer and Ottawa - where 287, 125 and 73 DNA reads, respectively, were detected. This is not a first report of the presence of D. corticola causing a tree disease in Canada as symptomatic trees have not been identified. Typically, like many other species of the Botryosphaeriaceae, this fungal pathogen is believed to be an opportunistic plant endophyte capable of living asymptomatically for several years before showing up as a pathogen when conducive conditions arise. Its presence as singletons in nearly half the sampled sites in Quebec and Ontario may be the result of long-distance spore dispersal originating from known infected sites in Massachusetts, Maine, and other unknown sites in the northeastern United States. However, its much higher read counts in three sites may indicate the possibility of a few trees being asymptomatically infected and spreading conidia locally.

The presence of Diplodia corticola, a tree pathogen in North America, was detected in Canada through bioinformatic analyses of DNA sequences. The pathogen was detected at a low rate in half of the 32 sites studied in Quebec and Ontario. The detection rate was higher for three sites, i.e. Québec, Aylmer and Ottawa. The presence of the pathogen in half of the sites could result from the long-distance dispersal of spores originating from Massachusetts, Maine and other areas in the northeastern United States. However, the three sites where a higher DNA rate was detected indicate the possibility that a number of surrounding trees may be infected and spreading spores locally.

Diplodia corticola is a pathogenic forest fungus that attacks oaks. It is virulent on infected trees, but it does not seem to be easily transferred to neighbouring trees. For this reason, we do not currently expect any major devastating outbreak. 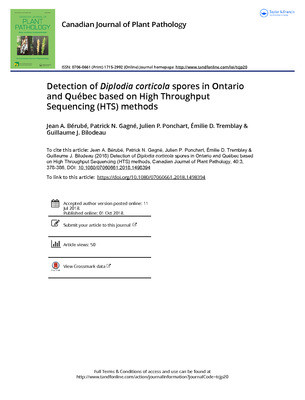