In much of the commercial boreal forest, dense road networks and energy corridors have been developed to access natural resources with unintended and poorly understood effects on surrounding forest structure. In this study, we compare the effects of anthropogenic and natural linear openings on surrounding forest conditions in black spruce stands (gap fraction, tree and sapling height, and density). Forest structure within a 100 m band around the edges of anthropogenic (roads and power lines), natural linear openings (streams), and a reference black spruce forest was measured by identifying individual stems and canopy gaps on recent high density airborne LiDAR canopy height models. CUSUM curves were used to assess the distance of edge influence. Forests surrounding anthropogenic openings were found to be gappier, less dense, and have smaller trees than those around natural openings. Forests were denser around natural and anthropogenic linear openings than in the reference forest with edge effects observed up to 24–75 m and 18–54 m, respectively, into the forest. A high density of saplings in the gappier forests surrounding anthropogenic openings may eventually lead to a higher forest biomass in the zone area surrounding roads as is currently observed around natural openings. 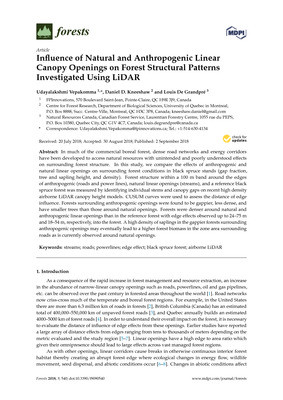