In 2008, a group of the top conservation scientists compiled a list of 100 priority questions for the conservation of the world’s biodiversity [Sutherland et al. (2009) Conservation Biology]. However, now almost a decade later, no one has yet published a study gauging progress in addressing these questions. This study takes a first step toward re-examining the 100 questions and identifying key knowledge gaps that remain. We defined highly-relevant questions as those which – if answered – would have the greatest impact on global biodiversity conservation, while effort was quantified based on the number of review publications addressing a particular question, which we used as a proxy for research effort. Using this approach we identified a set of questions that, despite being perceived as highly relevant, have been the focus of relatively few review publications over the past ten years. These questions covered a range of topics but predominantly tackled three major themes: the conservation and management of freshwater ecosystems, the role of societal structures in shaping interactions between people and the environment, and the impacts of conservation interventions. We see these questions as important knowledge gaps that have received insufficient attention and may need to be prioritised in future research. 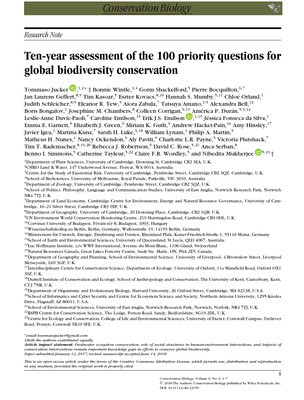