The western spruce budworm (Choristoneura occidentalis Freeman = C. freemani (Razowski), Lepidoptera: Tortricidae) (WSB) is a recurrent defoliator of Douglas-fir (Pseudotsuga menziesii (Mirb.) Franco) and other conifers in western North America. Repeated defoliation causes timber depletions, which often require control using pest management programs involving combinations of aerial sprays with biological controllers (Bacillus thuringiensis) and other tactics. Anticipating the recurrence cycle of this periodic defoliator is important for forest management planning, which needs to consider budworm-caused depletions in timber supply analyses, and for risk management and control. We studied the historical periodicity of outbreaks at the western edge of the insect’s distribution, on southern Vancouver Island, British Columbia, using the methods of dendrochronology applied to a living Douglas-fir chronology spanning 734 years (1281–2014 CE) and a floating chronology dating from 1863 to 1528 before the Common Era (BCE). To separate the growth fluctuations due to budworm defoliation from climatic fluctuations in the living chronology, we compared the temporal growth patterns of Douglas-fir with those of the non-budworm host western red cedar (Thuja plicata Donn ex D. Don), which is sympatric with Douglas-fir in this area. We concluded that before the 1930s, outbreaks were frequent, severe, and often spatially synchronized. Following the 1930s, periods of growth reductions indicative of outbreaks were present at the same frequency, but were less severe and not as synchronized as before. We provide evidence to suggest that periodic budworm disturbances on southern Vancouver Island have persisted through the centuries but that this regime has gradually shifted outside its historic range at about 1930. We concluded that although WSB is still present in this setting, population levels have not reached detectable outbreak levels for the last 90 years. We hypothesized that the absence of budworm outbreaks in the last 90 years is a response to the drastic ecosystem changes in this region caused by exploitation and fragmentation of the virgin forests, to possible changes in climate and to the accidental introduction of novel budworm predators into the ecosystem. 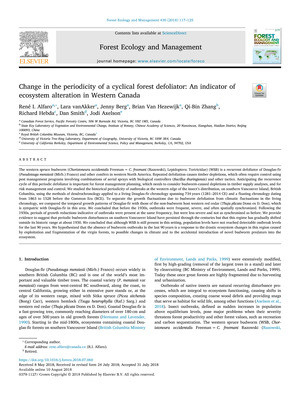