Ophiognomonia clavigignenti-juglandacearum endangers the survival of butternut (Juglans cinerea) throughout its native range. While screening for disease resistance, we found that artificial inoculations of 48 butternut seedlings with O. clavigignenti-juglandacearum induced the expression of external symptoms, but only after a period of dormancy. Before dormancy compartmentalized tissues such as necrophylactic periderms (NPs) and xylem reaction zones (RZs) contributed to limiting pathogen invasion. Phenols were regularly detected in RZs, often in continuity with NPs during wound closure, and confocal microscopy revealed their presence in parenchyma cells, vessel plugs and cell walls. Vessels were blocked with tyloses and gels, particularly those present in RZs. Suberin was also detected in cells formed over the affected xylem by the callus at the inoculation point, in a few tylosis walls, and in longitudinal tubes that formed near NPs. Following dormancy, in all inoculated seedlings but one, defensive barriers were breached by O. clavigignenti-juglandacearum and then additional ones were produced in response to this new invasion. The results of this histopathological study indicate that trees inoculated in selection programs to test butternut canker resistance should go through at least one period of dormancy and that asymptomatic individuals should be dissected to better assess how they defend themselves against O. clavigignenti-juglandacearum. 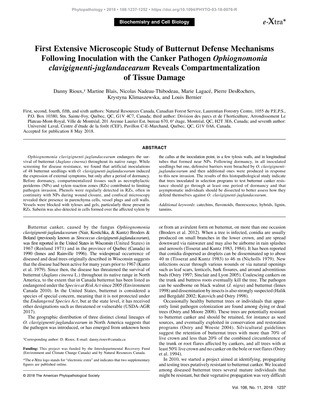